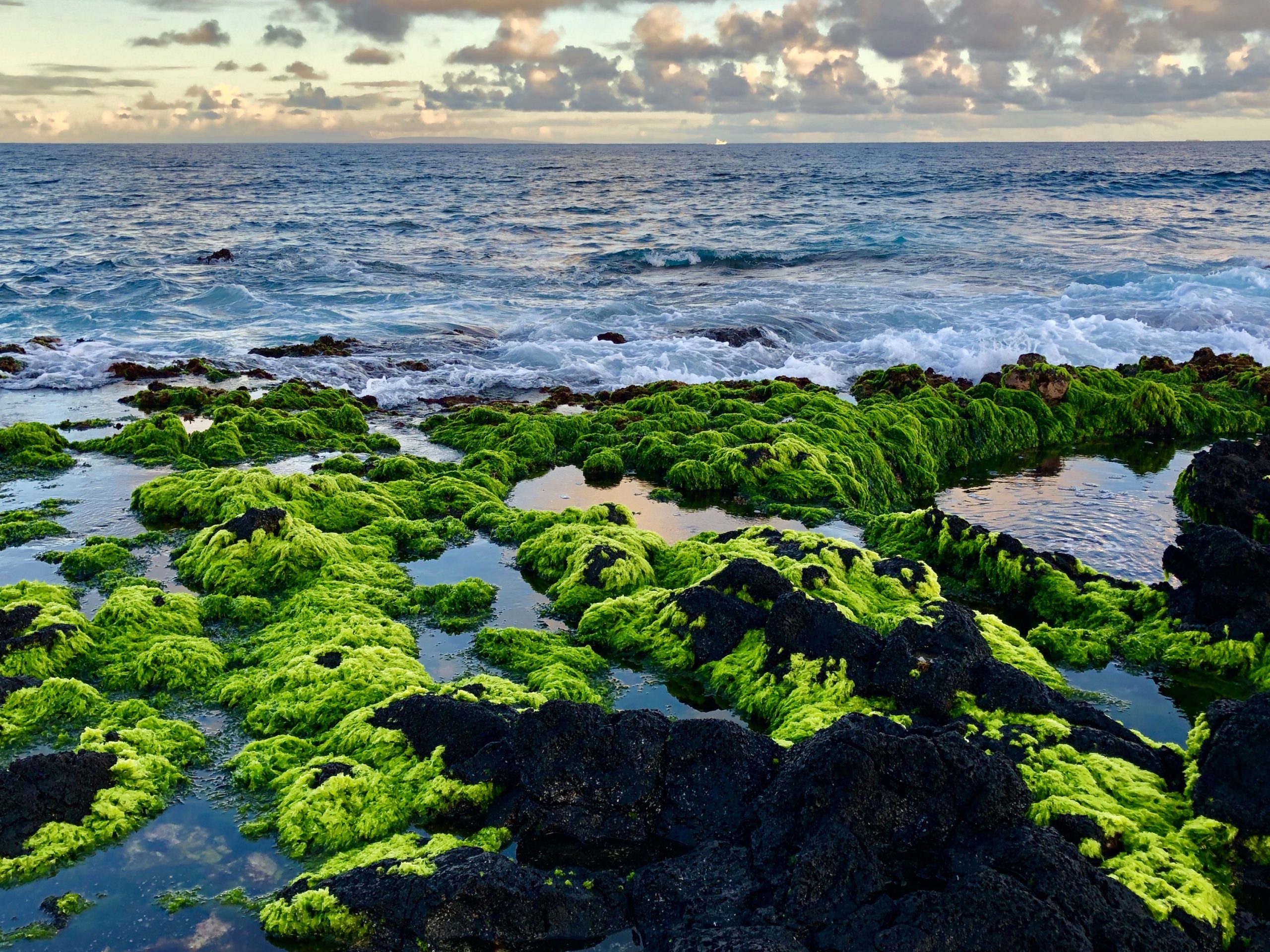 Hawaiian coasts can have abundances of highly-prized, native limu, or macroalgae. This favorite site has a ready supply of limu palahalaha, or Ulva lactuca, as a reward for limu pickers who trek to this relatively unimpacted Oʻahu coastline. Credit: Bill Thomas.

Native marine macroalgae, also known as limu, or as seaweed, thrive in environments created by natural groundwater seeps, specifically benefiting from the combined effects of enhanced  nutrients despite lowered salinity levels, according to a minireview published recently by a team of University of Hawai‘i at Mānoa researchers. Conversely, in areas where the seeping groundwater is tainted by excess nitrogen typical of wastewater, the study found it is invasive species that typically flourish in Hawaiʻi.

Human disturbed watersheds, particularly those with urban development and conventional agriculture, show a common theme of problems. Not just in Hawaiʻi but across the Pacific Islands, wastewater management can be a challenge, with tens of thousands of cesspools still in operation. Especially those along the shoreline are subject to subsurface inundation—readily delivering excess nitrogen and other contaminants to the coastline. Downstream of these areas, submarine groundwater discharge can be polluted by wastewater, agricultural fertilizer inputs and even common-use pharmaceuticals and pesticides.

To investigate the relationship between groundwater input and algal species in an area off southeast O‘ahu, Hawai‘i, the research team used a variety of methods. In the field, they relied on thermal infrared imagery of the coastline and naturally occurring chemical tracers to assess groundwater seepage; and documented the abundance of native and invasive algal species. In the lab, they measured the growth response of various species of algae to conditions that simulated varying compositions of submarine groundwater.

Their results point to the critical importance of sound land, water, and wastewater management policies and practices.

“There are multiple ways to improve the situation and prevent further deterioration of submarine groundwater discharge,” said Henrietta Dulai, lead author of the study and professor of Earth Sciences at the UH Mānoa School of Ocean and Earth Science and Technology. “Recharge can be improved by land-use choices through having more permeable urban surfaces and by restoring native forests. Lower groundwater withdrawal rates can be achieved by better management of water resources and water re-use. Additionally, upgrades to our wastewater infrastructure in light of impending sea level rise should be one of the primary goals.”

Efforts to remove land-based sources of wastewater from SGD are likely to benefit our communities in short and long-term ways. In the short term, shallow reefs are likely to return to overall healthier water qualities in these now impacted coastal regions. In a longer term, regrowth of native, not invasive algae, in those same regions is likely.

“The bottom line is if we want to sustain native macroalgae, we need to preserve submarine groundwater discharge flow and keep associated nutrient loads in check,” said Celia Smith, study co-author, Botany professor at UH Mānoa School of Life Sciences, and Co-Director of the Marine Biology Graduate Program.  “Keeping the discharged groundwater as close to pristine as possible needs to be a goal. Otherwise, we risk setting the stage for persistent, multi-year invasive algal dominance.”

With future studies, the team aims to determine the responses by native and invasive algae to the full range of groundwater discharge—pristine to tainted—to inform biocontrol efforts that outplant native algae, as well as gain insight into sea level rise impacts on these plants.