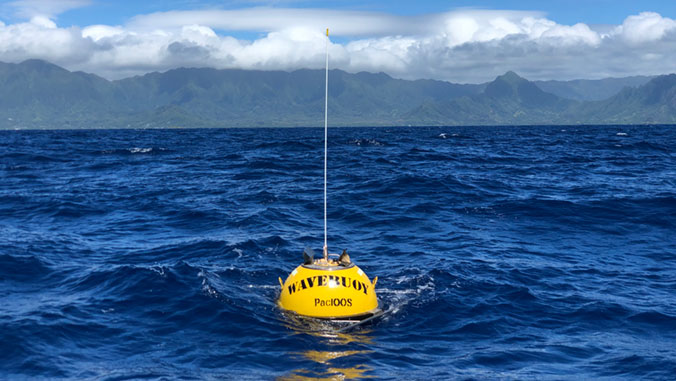 The Pacific Islands Ocean Observing System (PacIOOS) within the University of Hawaiʻʻ i at Mānoa is embarking upon a new five-year cooperative agreement with the U.S. Integrated Ocean Observing System (IOOS) through NOAA that helps hundreds of thousands of people each year. PacIOOS is receiving $3.08 million in competitive funding for the first year of this five-year award to collect, manage and serve coastal and ocean observing and forecasting data.

“Coastal resilience continues to be at the forefront of concerns throughout the islands, as increasing temperatures, flooding events and storm intensification threaten lives and livelihoods. We need accurate observations to improve our ability to make short- and long-term coastal and ocean predictions to protect our communities, shorelines and marine resources. I am pleased that PacIOOS is receiving federal funding to continue to serve as a regional data hub for the U.S. Pacific Islands,” said U.S. Sen. for Hawaiʻʻ i, Brian Schatz.

The focus of the upcoming five years will be to sustain and enhance existing coastal and ocean observations and forecasts, support coastal resiliency and climate adaptation, and strive for a more balanced geographical coverage throughout the Pacific Islands region.

“Our network of real-time observations and short-term forecasts informs more than half a million users every year. Federal, state and county agencies, non-governmental organizations, and commercial and recreational ocean users utilize information from PacIOOS to inform their activities, operations, planning and response. Our team looks forward to collaborating with our partners and users to enhance coverage and serve Pacific Island communities,” said Melissa Iwamoto, principal investigator and director of PacIOOS.

Established in 2007 within the School of Ocean and Earth Science and Technology at UH Mānoa, PacIOOS has evolved from a pilot project focusing on Hawaiʻi to a regional system that also includes the U.S. territories, Freely Associated States and Minor Outlying Islands. PacIOOS collects real-time observations, generates forecasts and develops user-friendly data products and visualizations to help inform decision making. Wave buoy data and forecasts, wave run-up forecasts, sea surface current observations and predictions, and water quality measurements are among the information that PacIOOS offers.

In 2015, PacIOOS was the first regional association to receive certification from IOOS, meaning it provides high-quality data that meet federal standards. All data and tools are easily accessible, publicly available and free of charge.

To support the continued growth, expansion and modernization of the nation’s coastal, ocean, and Great Lakes observing capabilities, IOOS awarded 11 regional associations with five-year cooperative agreements. A total of $41 million were awarded this year across the U.S. IOOS system.