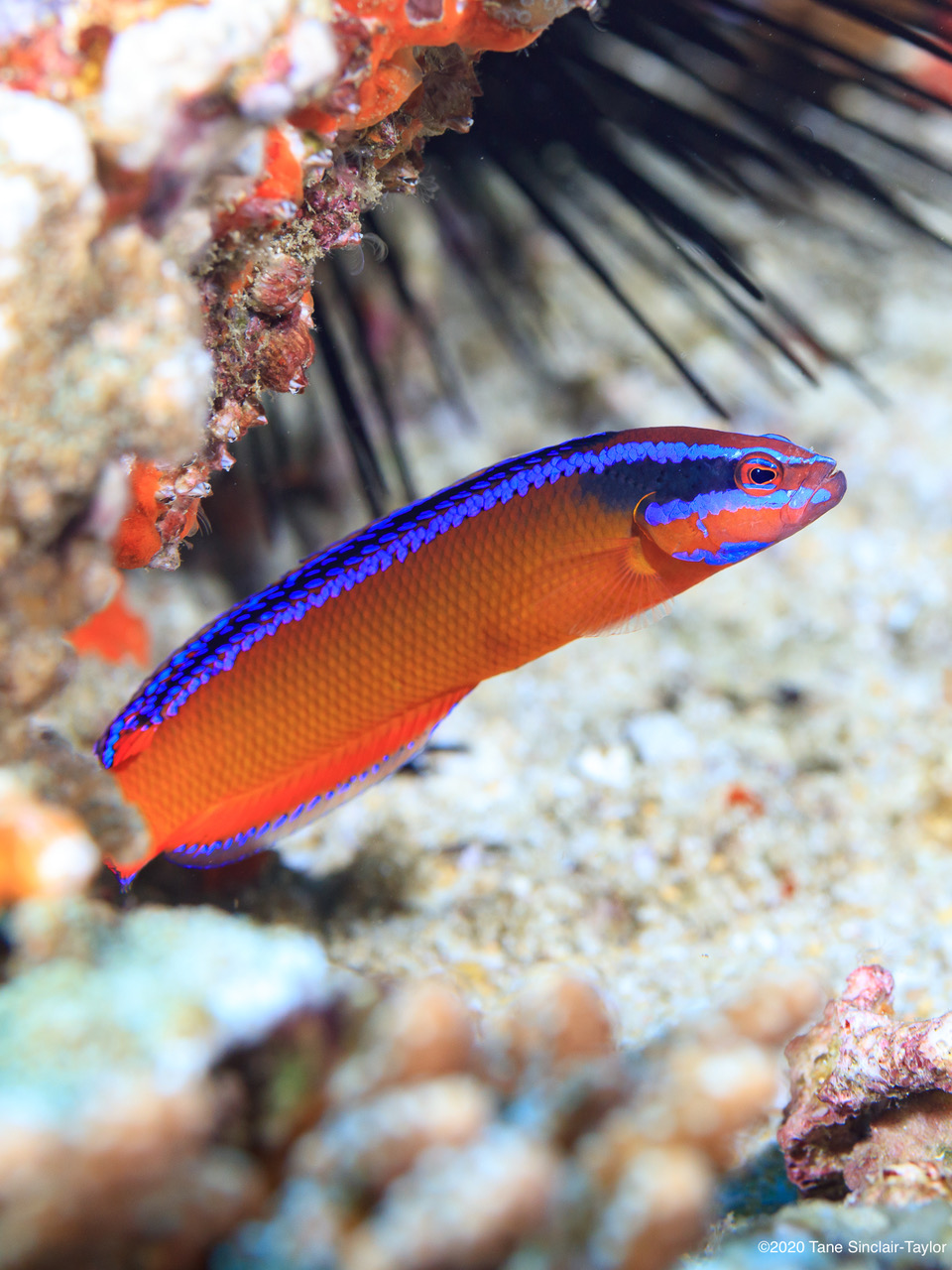 The neon dotty back (Pseudochromis aldabraensis) is a common cryptobenthic predator in the Sea of Oman, but does not occur in the Arabian Gulf. Credit: Tane Sinclair-Taylor.

An international team of researchers, including Jacob Johansen, assistant research professor at the University of Hawai‘i (UH) at Mānoa’s Hawai’i Institute of Marine Biology (HIMB), have found that small, bottom-dwelling reef fishes on the world’s hottest coral reefs in the southern Arabian Gulf are much less diverse and abundant than on nearby reefs with less extreme temperatures. The study, published in Nature Communications, examined ‘cryptobenthic’ fishes, small fish at the base of coral reef food webs, in the Arabian Gulf and the Sea of Oman, and linked the reduced diversity and productivity of communities in the Arabian Gulf to energetic deficits that preclude the existence of many species.

Watch a video summary of the study.

The scientists, hosted and supported by New York University, Abu Dhabi (NYUAD), were led by Johansen (previously a research scientist at NYUAD’s Marine Biology Lab) and Simon Brandl (currently at the Centre de Recherches Insulaires et Observatoire de l’Environnement, France).  They used a variety of techniques to compare organismal traits, diversity, and productivity of cryptobenthic reef fish in the environmentally extreme Arabian Gulf with those in the Sea of Oman.

As global warming continues to escalate, there are lasting implications to consider, including the changes to biological communities in vital habitats such as coral reefs.

“The Arabian Gulf is the world’s hottest sea, with summer water temperatures well beyond those experienced by fishes elsewhere in the tropics, while the adjacent Sea of Oman is considerably more benign. This makes this region a useful natural laboratory for understanding how climate extremes affect fish function and diversity,” said senior author Associate Professor of Biology at NYU Abu Dhabi John Burt.

Fish communities in the Arabian Gulf were found to be half as diverse and less than 25 percent as abundant as those in the Sea of Oman, despite broad similarities in the amount of live coral. Surprisingly, this does not seem to be related to absolute temperature tolerances of cryptobenthic fishes.

“We expected to see much lower temperature tolerances in species that occur in the Sea of Oman, but not in the southern Arabian Gulf,” said Johansen, who joined HIMB in the UH Mānoa School of Ocean and Earth Science and Technology in 2019. “Yet, the critical thermal tolerances of all species found in the Gulf of Oman were, in theory, sufficient to survive even the maximum summer water temperatures of 36°C [nearly 97 degrees Fahrenheit] in the southern Arabian Gulf.”

Instead, differences in prey eaten and body condition in the species present at both locations suggest that the thermal extremes of the Arabian Gulf are an energetically challenging environment for these smallest marine vertebrates. While survival in hotter waters require more energy, it appears that a distinct, less diverse set of prey items in the Arabian Gulf may make it difficult for these small-bodied fishes to satisfy their energetic demands.

Importantly, the reduced diversity and abundance of cryptobenthic fishes greatly impairs the unique functional role of these animals.

“These tiny fishes normally feed a lot of the larger, predatory animals on coral reefs by growing and dying rapidly, while constantly replenishing their populations,” explains Brandl. “But on reefs in the southern Arabian Gulf, cryptobenthic fish communities provide only a fraction of the fish flesh that they can produce in more benign environments.”

“Our findings highlight an imminent threat to cryptobenthic reef fishes and their essential role for coral reef functioning. These smallest marine ectotherms may struggle to compensate for increasing costs of growth and maintenance as they adapt to more extreme temperatures,” said Johansen. “Extreme environmental conditions, as predicted for the end of the 21st century, could, therefore, disrupt the community structure and productivity of coral reefs in the Arabian Gulf and beyond.”