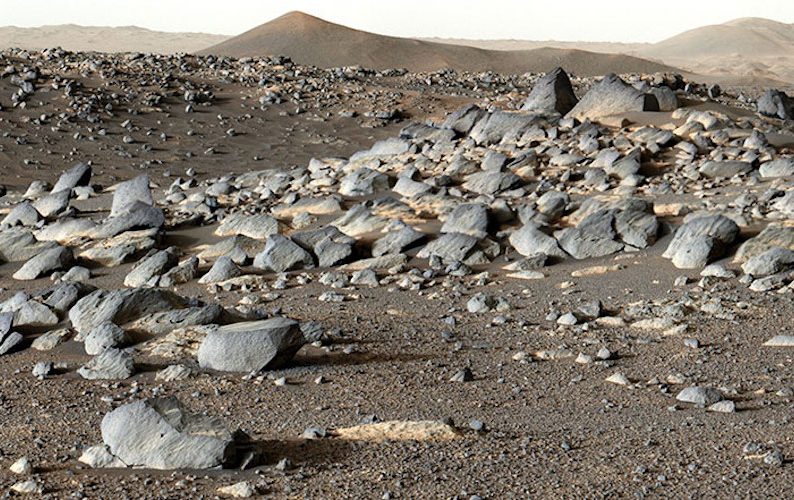 NASA’s Perseverance Mars rover looks out at an expanse of boulders on the floor of Jezero Crater. Credits: NASA/JPL-Caltech/ASU/MSSS

Using NASA’s Mars Perseverance rover, a team of scientists including several from the University of Hawai‘i at Mānoa School of Ocean and Earth Science and Technology (SOEST) made surprising discoveries about the composition of rock in Jezero Crater–information that will help determine when water existed on Mars, and ultimately, whether the red planet was ever habitable to microbial life.

Researcher Shiv Sharma, assistant research Tayro Acosta-Maeda and graduate student Evan Kelly, all based at the Hawai‘i Institute of Geophysics and Planetology (HIGP) in SOEST, are co-authors on two recently published studies that reveal that Jezero Crater is largely made up of igneous rock, rather than sedimentary rock; and that water has altered minerals in the crater floor rock. The studies were published in Science and Sciences Advances.

The rock and mineral analysis was done by SuperCam, an instrument that uses a focused infrared laser beam to remove dust and material from rock surfaces in a technique called laser-induced breakdown spectroscopy (LIBS). The energy burst from each five-nanosecond pulse creates a flash; its optical spectrum (specific colors) reveals the elemental chemistry of targets up to about 25 feet away.

“This finding of igneous rock is a surprise,” said Sharma, a co-investigator on the SuperCam instrument team. “It also shows the power of spectroscopic instruments on the Perseverance rover at the crater floor rather than just imaging from a spacecraft from above.”

The crater where Perseverance landed in 2021 held water billions of years ago. For that reason, scientists predicted that rock in the area would be sedimentary, formed over time from settled mud, which would be the case for lake beds on Earth. Finding that rock in Jezero is igneous, which is formed by volcanic magma, was unexpected. However, it has its advantages. Igneous rock is easier to date and could give researchers a more accurate way to estimate when Mars had water.

The search for life is one of Perseverance’s main goals and one of the reasons it landed in Jezero Crater in the first place. Discovering the potential for habitable environments in something as uninhabitable as Jezero Crater’s aged lava flows raises hopes for what lies in the sedimentary rocks the mission is examining now.

“The water we found and will likely find in the ancient delta rocks will help us unveil how Mars became what it is today, and whether it could have been habitable, when, for how long, and if it could host life,” said Acosta-Maeda, a participating scientist on the SuperCam instrument team.

The rocks the scientists analyzed have been stored for return to Earth. NASA and the European Space Agency are planning to return the rock samples to Earth around 2033. The ambitious plan requires building the first vehicle that can launch from the surface of Mars and rendezvous with an orbiter that ferries the samples back to Earth.

The payoff for that herculean task will be highly detailed studies of the rock samples that cannot be performed on the rover. These studies include measuring the age of the rocks and looking for signs of ancient life. Because the rock samples taken at the bottom of the crater likely predate the river delta, dating these rocks will provide important information about the age of the lake.

The rover is now surveying the river delta to collect additional rock samples for the Mars Sample Return mission.

* * *
Portions of this content are courtesy of Los Alamos National Laboratory, NASA JPL, University of Florida and Purdue University.