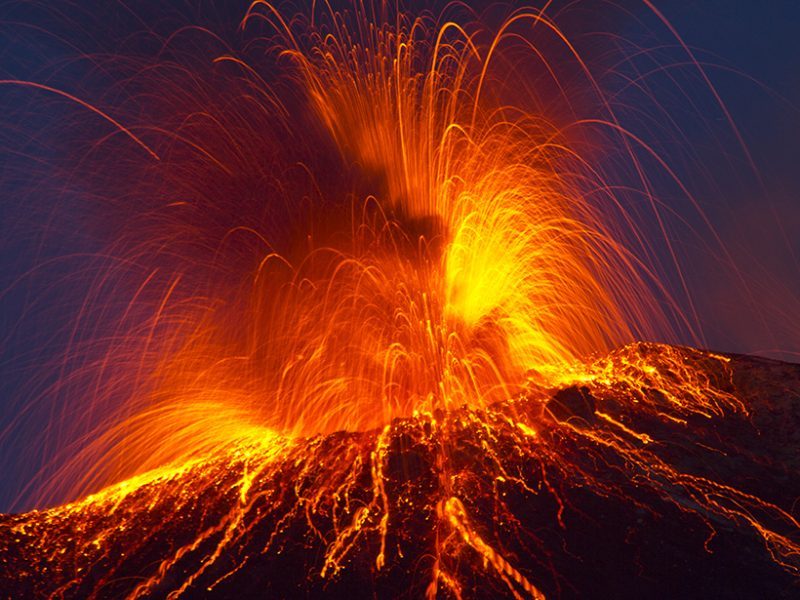 The National Science Foundation awarded volcanologists Bruce Houghton, at the University of Hawai‘i at Mānoa (UH Mānoa) School of Ocean and Earth Science and Technology (SOEST), and Rebecca Carey, with the University of Tasmania, a $471,897 grant to partner with scientists at the U.S. Geological Survey (USGS) Hawaiian Volcano Observatory (HVO) to improve fundamental understanding of the behaviors of Hawaiian and Strombolian volcanoes and help assess hazards of future explosive events at basaltic centers.

Basaltic explosive eruptions are highly dynamic, and prone to transitions in style and intensity that cannot yet be predicted. This diversity is exemplified by two island volcanoes: Kilauea in Hawai‘i and Stromboli in Italy. Both are very active volcanoes, as evidenced by the ongoing eruption on Hawai‘i Island. Activity at these volcanoes can be passive degassing through isolated, impulsive bubble bursts; powerful single explosions; unsteady spattering; or sustained fountains.

“Their eruptions pose constant challenges for management agencies, exemplified by the situation at Kilauea, because the eruption sites are highly accessible and there is a need to balance the strong popular interest in viewing the eruptive activity against public safety,” said Houghton, the Gordon Macdonald Professor of Volcanology in Geology and Geophysics in SOEST. “This balance requires critically on sophisticated knowledge of the volcanoes current and immediately future behavior.”

The three-year grant is expected to identify patterns and precursors indicative of possible changes in volcanic activity, supporting management of risk at the world’s most popular ‘tourist volcanoes’.

“Our HVO (and Italian) partners in this study have federally mandated roles to advise response agencies and will transfer knowledge to the bodies charged with risk management,” said Houghton.

This project will involve exchange of material and ideas between institutions in the USA, the United Kingdom, and Italy to the benefit of young researchers and students. The results will be widely disseminated via meetings and workshops, courses offered by the FEMA-funded National Disaster Preparedness Training Center at UH, on the internet and in scientific publications.

In Hawai‘i, HVO will be the key partner. Matthew Patrick, Carolyn Parcheta, Tim Orr and Patricia Nadeau are involved in all phases of the study.

HVO Scientist-in-Charge Christina Neal said, “This important continuing effort with colleagues at UH Mānoa and University of Tasmania will add critical insights to our ability to accurately assess and communicate hazard here in Hawaii. Furthermore, the fundamental volcanology outcomes will be applicable to volcano hazard challenges elsewhere in the US and abroad.”

The project will focus on questions like: What drives rapid changes from discrete explosions to prolonged intervals of sustained fountaining? What are the links between eruption style and gas flux and chemistry? How do changing vent characteristics influence style and intensity of eruptions?

The research team will rely on high resolution field measurements using synchronized thermal and gas cameras along with high-speed cameras. Immediately, a focus will be on the newly started eruption along Kilauea’s Lower East Rift Zone.

These observations of dynamics of eruptive processes will be paired with geophysical data to explain fine-scale variations in the location and timing of explosive activity at basaltic volcanoes.