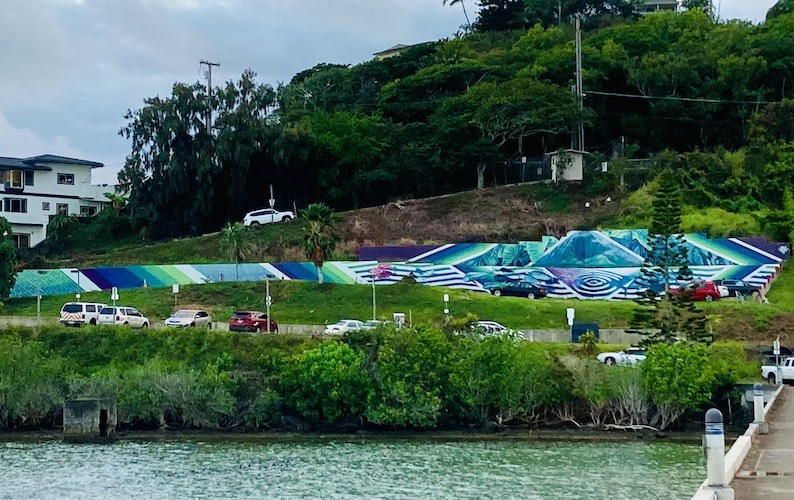 A mural based on the moʻolelo (story) of Keahiakahoe, meaning the fire of Kahoe, now spans across the University of Hawaiʻi at Mānoa Hawaiʻi Institute of Marine Biology (HIMB) Lilipuna pier area where students, faculty, staff and visitors park to take the boat out to Moku o Loʻe (Coconut Island).

The boat ramp area, Moku o Loʻe where HIMB conducts research, and the two highest mountain peaks in the Koʻolau range are named after the four siblings in the moʻolelo of Keahiakahoe: Pahu, Loʻe, Kahuaʻuli and Kahoe.

“It has been a pleasure to watch the mural emerge,” said Eleanor Sterling, director of HIMB. “The Keahiakahoe story has many versions and meanings, and it makes me reflect on critical connections across land and sea and on never losing sight of care for relationships within your ʻohana and ahupuaʻa. At HIMB we work to honor those connections, and the mural is a beautiful daily reminder for us.”

The design includes landscape features named for the four siblings in the moʻolelo. The mountain peaks represent the brothers who lived upland, Kahoe and Kahuaʻuli. The rippling pool and water drop represents the sister, Loʻe and the spring that formed near the base of the mountain from her tears. The fourth sibling, Pahu, is present in the fish as he was a fisherman.

“The moʻolelo tells of the importance of honesty, working together with generosity, and sustainably bridging the reciprocal relationship between mauka and makai,” said the artists. “Highlighting these physical land features with the mural helps to fundamentally ground the story and its message/moral to the physical space of the Lilipuna pier area. We hope for the moʻolelo imagery to root the design in the past—while at the same time, the added graphic patterns based on close-up imagery of limu (seaweed) and coral tie in the current and future scientific work and research done at HIMB in contemporary times.”

The many lines in the mural visually line up to form a central diamond in one spot, but based on an individual’s height and other factors, that spot may be in different places. This introduces the concept of makawalu (many) and the importance of looking at things from multiple perspectives in order to gain deeper knowledge, understanding, and find solutions to problems.

The historical relationships between land, sea and humans are a focal point that relates closely to much of the place-based research going on at HIMB.

“I was fortunate enough to get to witness the mural being created day by day as I came to work at HIMB,” said Elizabeth Madin, assistant researcher at HIMB. “This project has meant a lot to me personally because, as a scientist, creative pursuits can often get lost, but painting has long been a hobby of mine. Being part of making this mural come to life (even if not as an artist myself) has been so fulfilling both for this reason, and most importantly because I see combining science and art as a great way to get conversations started about ecology and conservation.”

This was a partnership among HIMB, Hawaiʻi FEAST and Hawaiʻi Sea Grant.