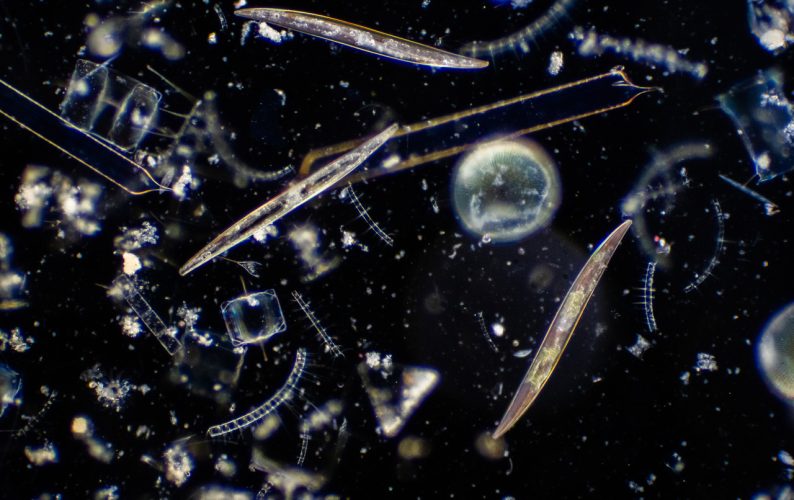 Diatoms are photosynthesizing algae. They have a siliceous skeleton and are found in almost every aquatic environment including fresh and marine waters.

A study published in Science Advances by an international team of scientists, including University of Hawai‘i at Mānoa oceanography professor David Karl, provides clear evidence that marine phytoplankton are much more resilient to future climate change than previously thought.

Combining data from the long-term Hawai‘i Ocean Time-series program at UH Mānoa with new climate model simulations conducted on one of South Korea’s fastest supercomputers, the scientists revealed that a mechanism, known as nutrient uptake plasticity, allows marine algae to adapt and cope with nutrient-poor ocean conditions that are expected to occur over the next decades in response to global warming of the upper ocean.

“Knowing how marine algae will respond to global warming and to associated decline of nutrients in upper ocean waters is crucial for understanding the long-term habitability of our planet,” said Karl.

Phytoplankton are tiny algae which drift at the ocean’s surface and form the basis of the marine food web. While photosynthesizing, these algae absorb nutrients (for example, phosphate and nitrate), take up dissolved carbon dioxide, and release oxygen, which makes up about 50% of the oxygen that we breathe.

Global warming affects the upper layers of the ocean more than the deeper layers. Warmer water is lighter and hence the upper ocean will become more stratified in future, which reduces mixing of nutrients from the subsurface into the sun-lit layer, where phytoplankton reside. Earlier studies suggested that the expected future depletion of nutrients near the surface would lead to a substantial reduction of ocean’s phytoplankton production with widespread and potentially catastrophic effects on both marine ecosystems and climate.

But according to a new study in Science Advances, this may not happen. New analyses of the upper ocean phytoplankton data from Hawai’i Ocean Time-series program shows that productivity can be sustained, even in very nutrient-depleted conditions.

“Under such conditions individual phytoplankton cells can substitute phosphorus with sulfur. On a community level, one might see further shifts towards taxa that require less phosphorus,” said Karl, who is also co-founder of the Hawai‘i Ocean Time-series program, to illustrate the concept of phytoplankton plasticity.

Further supporting evidence for plasticity comes from the fact that in subtropical regions, where nutrient concentrations in the surface waters are low, algae take up less phosphorus per amount of carbon stored in their cells, as compared to the global average.

To study how this unique metabolic “hack” will impact global ocean productivity over the next few decades, the team ran a series of climate model simulations with the Community Earth System model on their supercomputer Aleph. By turning off the phytoplankton plasticity in their model, the authors were able to qualitatively reproduce previous model results of a decline in global productivity by about 8%. However, when turning on the plasticity parameter in their model, in a way that captures the observations near Hawai‘i for the past three decades, the computer simulation reveals an increase in global productivity of up to 5% until the end of this century.

“Regionally, however, these future productivity differences can be much higher, reaching up to 200% in subtropical regions,” said Eun Young Kwon, first author of the study and a researcher at the IBS Center for Climate Physics at Pusan National University, South Korea.

With this extra productivity boost, the ocean can also take up more carbon dioxide from the atmosphere and eventually sequester it below the ocean’s surface.

“Even though our study demonstrates the importance of biological buffering of global-scale ecological changes, this does not imply that phytoplankton are immune to human induced climate change. For instance, worsening ocean acidification will reduce the calcification rates of certain types of phytoplankton, which can lead to large-scale shifts in ecosystems,” warned Eun Young Kwon.

These factors are neither well understood nor represented yet in climate models.

“Future Earth system models need to use improved observationally-based representations of how phytoplankton respond to multiple stressors, including warming and ocean acidification. This is necessary to predict the future of marine life on our planet,” said Axel Timmermann, study co-author and director of the IBS Center for Climate Physics.