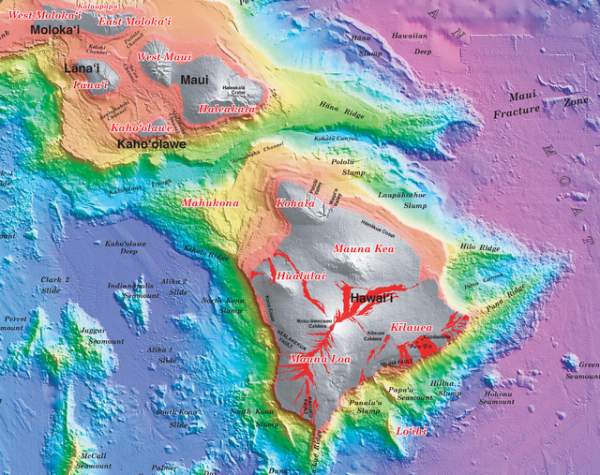 Most have never heard of Mahukona, one of the smallest volcanoes in the Hawaiian Island chain. The 9,500-foot volcano is submerged some 30 miles west of Kohala. (Capture from poster prepared by Japan Marine Science and Technology Center, University of Hawaii School of Ocean and Earth Science and Technology.)

Most have never heard of Mahukona, one of the smallest volcanoes in the Hawaiian Island chain. That’s probably because, even though Mahukona’s summit stands at about 9,500 feet — making it taller than the highest prominence in the Canadian Rockies — it has probably only ever come within a few hundred meters of the surface of the Pacific. The volcano is submerged some 30 miles west of Kohala and named for the Hawai‘i Island ahupua‘a (land division) off which it sits.

Mahukona is the most recently discovered shield volcano in the Hawaiian Islands — it was identified and named in 1987. But it wasn’t until Geology and Geophysics (G&G) professor Mike Garcia and his team dredged lava from the surfaces of Mahukona in 1990 that scientists knew definitively that they were looking at a distinct volcano. In 2009, they took the research vessel Kilo Moana to the waters just above Mahukona to better understand its shape.

Read more about it in West Hawaii Today.