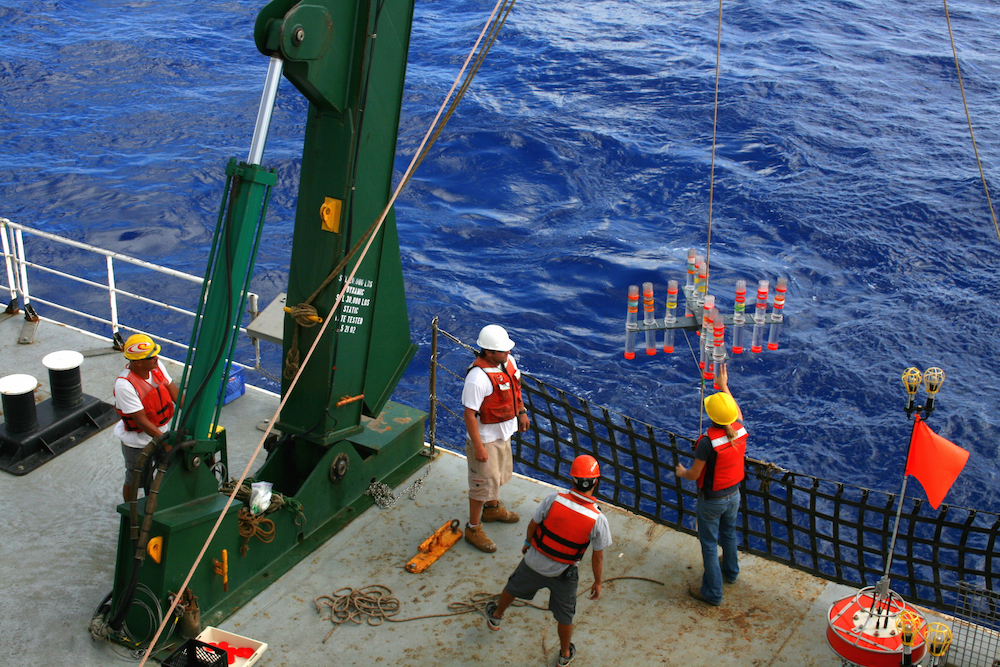 Since October 1988, scientists from the University of Hawaii have been sampling microorganisms at Station ALOHA with funding from the National Science Foundation.  This long-term data set is one of a few in the world where the impacts of human-induced climate change can be distinguished from natural climate variability. Credit: Tara Clemente.

An international group of leading microbiologists, including University of Hawai‘i at Mānoa oceanography professor David Karl, have issued a warning, saying that not including microbes – the support system of the biosphere – in the climate equation will lead to incomplete predictions of the environmental consequences of global climate change.

More than 30 microbiologists from 9 countries are calling for the world to stop ignoring an ‘unseen majority’ in Earth’s biodiversity and metabolism when addressing climate change. ‘Scientist’s warning to humanity: microorganisms and climate change’ was published today in the journal Nature Reviews Microbiology.

With their statement, the researchers are hoping to raise awareness both for how microbes can influence climate change and how they will be impacted by it – calling for including microbes in climate change research, increasing the use of research involving innovative technologies, and improving education in classrooms.

“Micro-organisms, which include bacteria and viruses, are the lifeforms that you don’t see on the conservation websites,” said Professor Rick Cavicchioli, microbiologist at the School of Biotechnology and Biomolecular Sciences at UNSW Sydney, who led the global effort. “They support the existence of all higher lifeforms and are critically important in regulating climate change. However, they are rarely the focus of climate change studies and not considered in policy development.”

Microbes dominate the life on Earth and perform critical functions in animal and human health, agriculture, the global food web and industry.

In their statement, the scientists call on researchers, institutions and governments to commit to greater microbial recognition to mitigate climate change. Additionally, climate change research that links biological processes to global geophysical and climate processes should have a much larger focus on microbial processes.

“Microorganisms controls the pulse of our planet.  They harvest solar energy, recycle organic matter, sequester carbon dioxide, and detoxify many human-made pollutants.  In other words, microbes make things happen,” said Karl, who is also the director of the UH Mānoa Center for Microbial Oceanography: Research and Education.

Microbiologists are also working on improving resources that will be made available for teachers to educate students and the public-at-large about the importance of microbes. Enhancing knowledge of the microbial world will improve understanding of microbes’ vital role in the global ecosystem.

Microbiologists can endorse the researchers’ warning by becoming a signatory here.