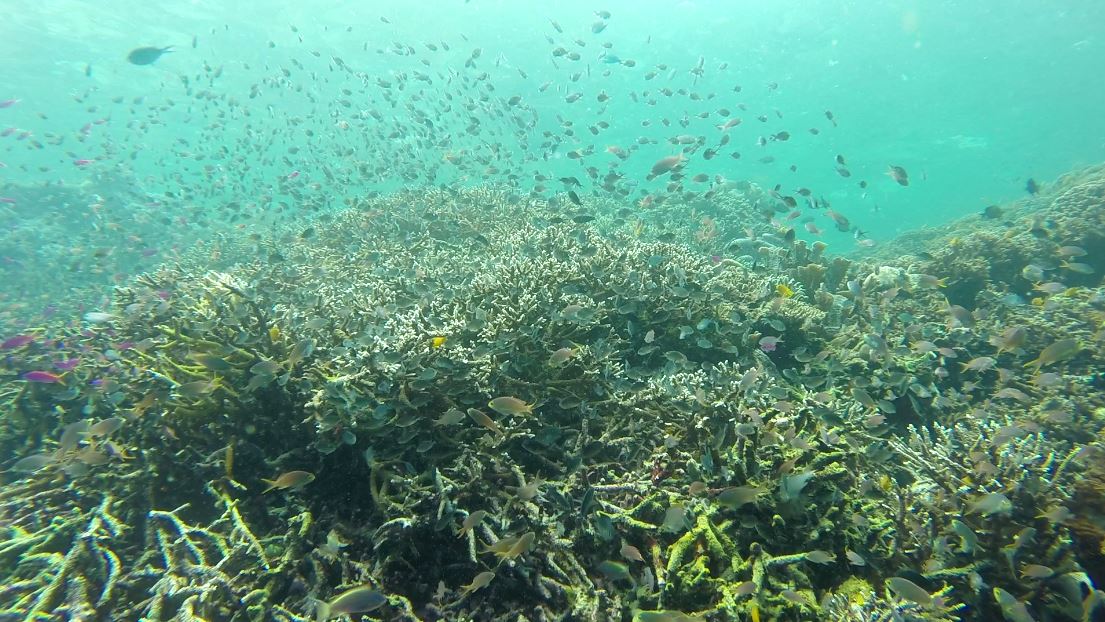 The largest study ever conducted of its kind has identified where and how to save coral reef communities in the Indo-Pacific, according to an international group of scientists that included University of Hawaiʻi (UH) at Mānoa researchers Erik Franklin, Camilo Mora, and Kuʻulei Rodgers and others from conservation NGOs, government agencies, and universities. The study outlines three viable strategies that can be quickly enacted to help save coral reefs that are threatened by climate change and human impacts—protect, recover, and transform.

Published in the journal Nature Ecology and Evolution, the study involved the efforts of more than 80 authors who surveyed coral abundance on more than 2,500 reefs across 44 countries in the Indian and Pacific Oceans. The findings revealed that the majority of reefs had functioning coral communities with a living cover of architecturally complex species that give reefs their distinctive structure.

“The study provides a roadmap for reef managers to identify areas that can benefit from active management practices at a local scale while also preparing for potential future impacts from increasing climate hazards,” stated Erik Franklin, co-author of the study and assistant research professor at the Hawai‘i Institute of Marine Biology in the UH Mānoa School of Ocean and Earth Science and Technology (SOEST).

Increasing carbon emissions and human impacts of overfishing, pollution and unsustainable development have led to predictions of a bleak future for tropical reefs and the millions of people who depend on them. After the damage caused by severe heat stress during the 2014-17 El Niño event, the authors found nearly 450 reefs in 22 countries across the Indo-Pacific that survived in climate ‘cool spots’ that should be prioritized for urgent protection and management.

“The good news is that functioning coral reefs still exist, and our study shows that it is not too late to save them,” said Wildlife Conservation Society (WCS) Conservation Scientist Dr. Emily Darling, lead author of the study and leader of WCS’s global coral reef monitoring program. “Safeguarding coral reefs into the future means protecting the world’s last functioning reefs and recovering reefs impacted by climate change. But realistically – on severely degraded reefs – coastal societies will need to find new livelihoods for the future.”

The study also identifies the minimum requirements to save functioning reefs. This required evaluating the impacts of 20 environmental, climatic, and human-caused stressors on reef-building corals.  The authors found that higher abundances of framework corals, the species that build the backbone of coral reefs, occurred in locations with fewer climate shocks and longer recovery windows. Higher coral abundances were also found farther from coastal populations and their associated markets and agricultural impacts.

The authors’ findings helped to formulate the three strategic choices of management for the reefs.

The study’s findings stress that strategic local management can play a role in helping protect corals through tools such as marine protected areas or other management restrictions that reduce threats and keep coral reefs above functional thresholds. However, the authors noted that local management can complement but not replace the need for worldwide efforts to limit carbon emissions.

This work was supported by the John D. and Catherine T. MacArthur Foundation and the Bloomberg Philanthropies’ Vibrant Oceans Initiative.