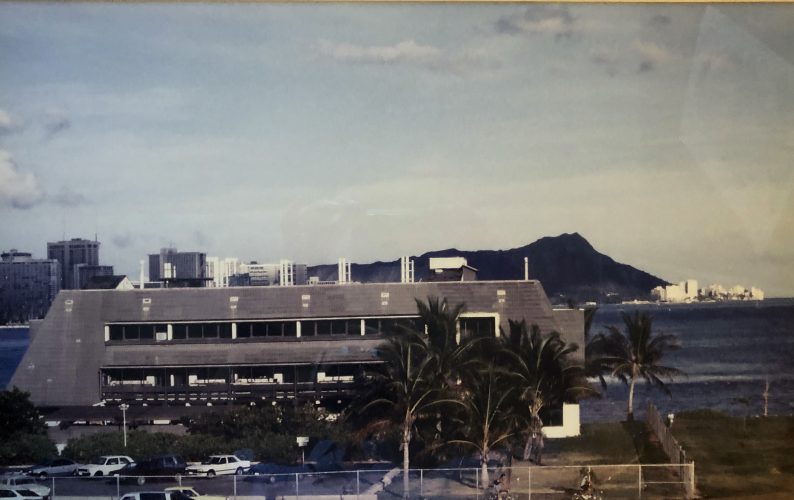 KML, housed in the UH Mānoa School of Ocean and Earth Science and Technology, began operations in 1972. Over the past five decades, KML has supported cutting-edge research focused on the study of unique marine organisms of Hawaiʻi and the Pacific, their evolution and development, ecological relationships, responses to both anthropogenic and natural stressors and their conservation biology.

“We are delighted to celebrate this milestone of 50 years at the Kewalo Marine Lab,” said Bob Richmond, director of KML. “Our research spans from molecules to ecosystems and has brought millions of dollars to Hawaiʻi and the Pacific Islands to support research and train students at all levels. We bridge science to policy, and knowledge to action in order to protect the marine biodiversity and marine resources of ecological, economic, and cultural value. We are excited for the future of KML as we continue excellence in both basic and applied research and keep Hawaiʻi at the forefront of experimental marine biology.”

Originally founded as a research laboratory, KML supports visiting scientists from the continental U.S. and international research community in the development and application of laboratory-based research approaches and tools, including microscopy, microbiology, molecular biology including multi-omics, ecotoxicology and developmental biology. The research at KML sits at the cutting-edge of conservation and environmental microbiome studies by embracing Native Hawaiian and Pacific culture, traditional knowledge and practice—linking lessons learned from marine systems to ahupuaʻa (from ridge to reef) and human health.

“One of the objectives of KML is to perpetuate place-based knowledge and ecological-based studies that confront challenges facing Pacific Islands and return this knowledge to communities,” said Kiana Frank, assistant professor at KML. “KML has helped to build resources that have increased the participation of Native Hawaiian and Pacific Islander communities in STEM education, restoration and conservation efforts, as well as promoted effective engagement between students, community, researchers and policy makers.”

KML’s training supports research by undergraduate and graduate students, postdoctoral researchers and K–12 students for visits and science fair projects. The lab has been the home of several training programs funded by the National Science Foundation and the National Institutes of Health targeting Native Hawaiian and Pacific Islander students—groups underrepresented in the STEM disciplines—based in Hawaiʻi and throughout Micronesia.

Faculty have also supported Hawaiʻi-based science education in partnership with the Polynesian Voyaging Society, Kamehameha Schools and the Hawaiʻi State Department of Education. They have also partnered with and supported governmental and local community-based organizations in efforts to conserve Hawaiʻi’s precious marine resources of ecological, economic and cultural value.

“This milestone emphasizes how important marine science, especially marine biology, is in Hawaiʻi,” said Michael Hadfield, emeritus professor at KML. “While there has been a lot of news about the roles of UH biologists in oceanography and coral-reef studies, the fundamental research in cell biology, developmental biology and symbiosis has often been overlooked. We stand out at KML and are proud to recognize 50 years of excellent research in Hawaiʻi and beyond.”

KML was conceived in the mid-1960s by then UH Vice President Robert Hiatt and Pacific Biosciences Research Center‘s (PRBC) second director, Terence Rogers. The goal was to develop a state-of-the art facility for carrying out experimental marine biology on model organisms for studying basic questions in biological science.

During that time, a $550,000 grant was secured from the National Science Foundation for building funds. The site at Kewalo Basin was leased from the state, and the building was designed by Honolulu architect Richard Dennis. KML’s original five faculty were hired prior to the lab’s opening and worked in labs behind the Waikīkī Aquarium until construction was completed.

Since 1972, KML has earned an international reputation for excellent research in biological sciences and has played a vital role in fulfilling UH‘s mission in marine biological research. KML faculty and researchers have helped make UH a well-known and respected institution among scientists worldwide for pushing the frontiers of marine biological discovery.