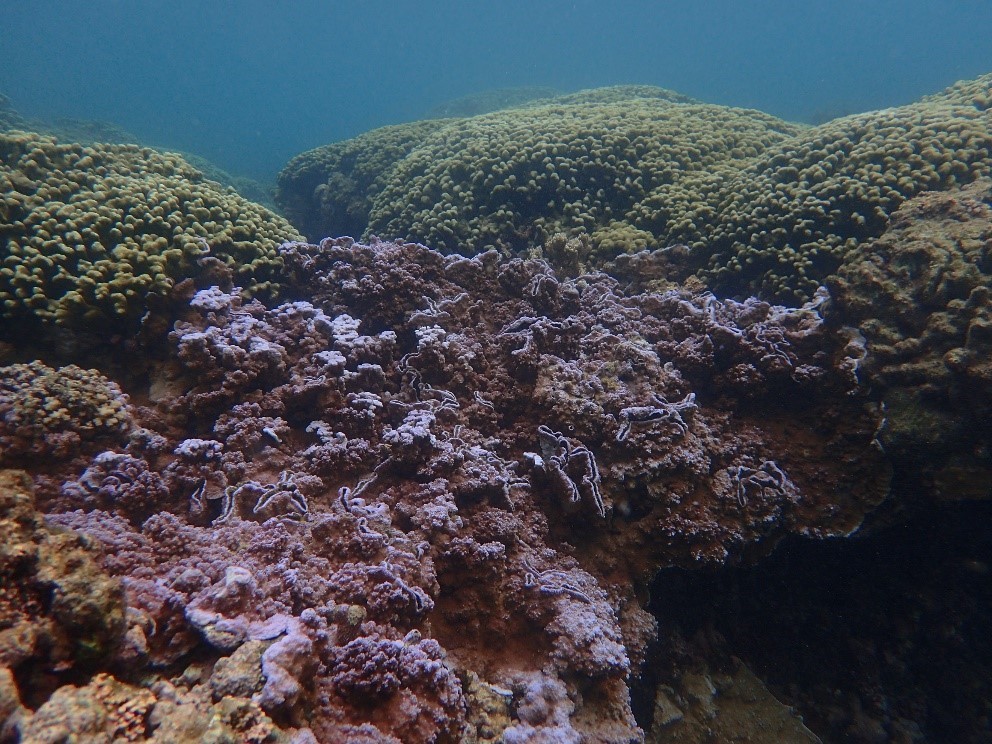 A team of scientists from the University of Hawai‘i at Mānoa and the Smithsonian Institute recently discovered that the Hawaiian blue rice coral may reveal important clues as to how some corals might weather climate change. This coral produces a protein that imparts the deep blue color, but it also acts as a natural sunscreen. The team hypothesized that this sunscreen filters out harmful ultraviolet (UV) radiation that may be detrimental to coral reproduction. Their findings are published recently in Nature Scientific Reports.

Coral reproduce by releasing eggs and sperm into the water column. As climate changes and the ocean warms, coral become stressed. This can also affect their ability to reproduce and sustain healthy reefs. If coral cannot reproduce, they cannot generate adaptions to changing conditions in our oceans.

With the Hawai‘i Institute of Marine Biology (HIMB) at UH Mānoa School of Ocean and Earth Science and Technology (SOEST) as their base, the Smithsonian team conducted long-term monitoring on coral reproduction of two coral species in Kāneʻohe Bay, Hawaiʻi. They found that after the consecutive large-scale bleaching events in 2014 and 2015, that sperm motility fell in the monitored species by almost 50%. However, later studies conducted by PhD candidate, Mike Henley, and colleagues determined that the blue rice coral seemed immune to these reproductive changes. Specifically, the blue rice coral had sperm motility typically above 90%, while their partner species, the brown rice coral, had half this amount. They did not know how to explain these large differences, but the clues may reside in the coral’s color.

Coral color is produced largely by their internal algae giving many species in Hawai‘i a brownish appearance. These algae also produce sunscreen for the coral. However, when the oceans warm, the algae are expelled, and corals appear bleached. When the algae leave, the sunscreen goes along with them, leaving the coral vulnerable to harmful UV radiation.

In contrast, the blue rice coral produce their own sunscreen (the blue pigment)  and might retain protection from UV radiation, even after their internal algae leave during bleaching. The team suggested that the brown rice coral may suffer long-term damage to their reproductive stem cells during the bleaching event (when the sunscreen is absent). This in turn impedes their reproductive recovery and produces damaged sperm for many years.

“We had studied the brown rice coral for several years and witnessed in real time their decline due to bleaching in 2014 and 2015,” said Michael Henley, lead author and PhD candidate at HIMB. “The blue rice coral is often overlooked, and its sperm motility wowed us the very first time we saw it. While the brown rice coral lagged behind in recovery from bleaching, the blue rice coral either recovered really quickly, or perhaps it was never impacted at all. Hopefully, this work will reveal clues to help other corals weather climate change and ocean warming,” said Henley.