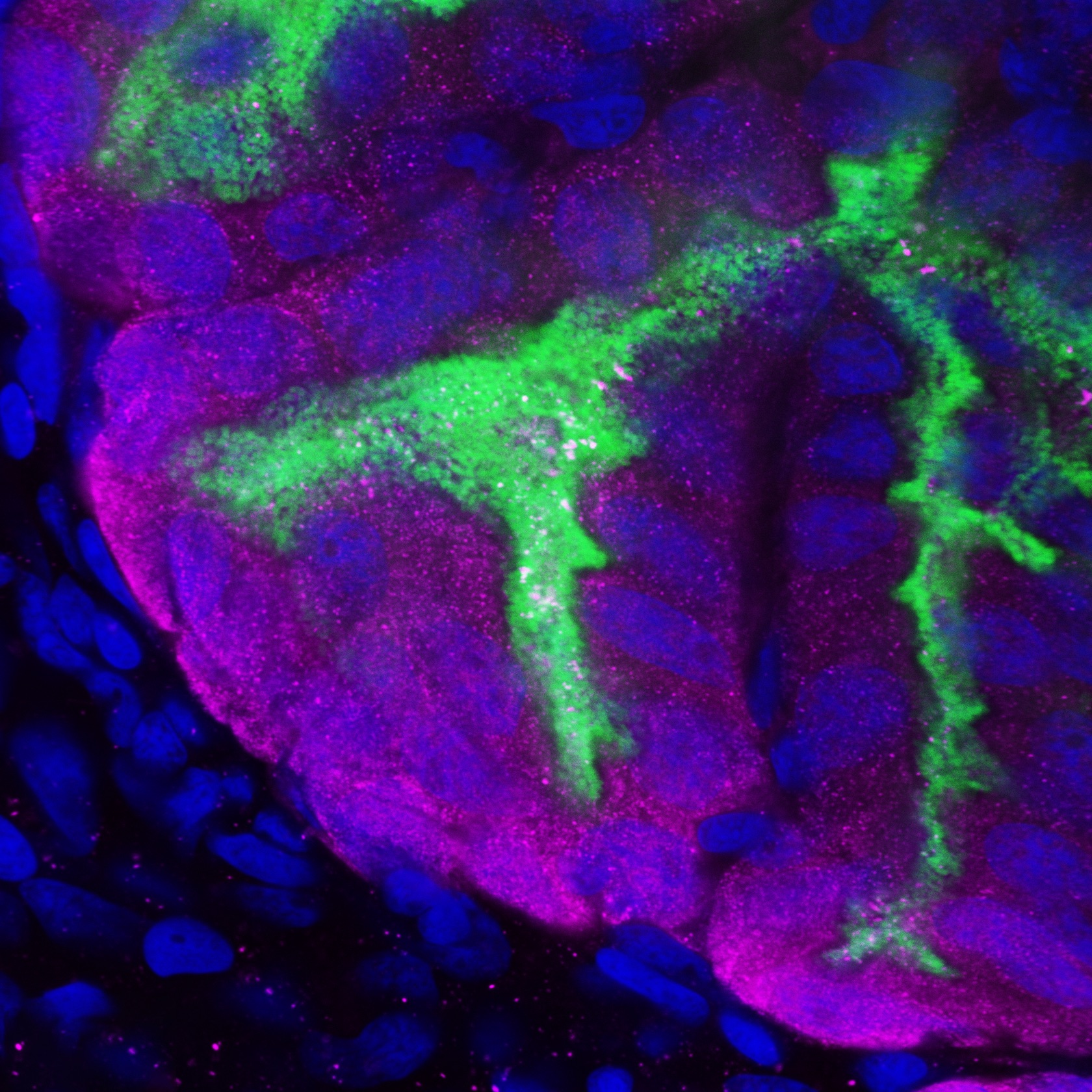 A 63x magnification image showing the 4-week-old light organ during the day showing EsMIF (magenta) surrounding the crypt spaces. Host DNA is labeled in blue and the bacteria are labeled in green. Credit: Eric Koch.

Nearly every organism hosts a collection of symbiotic microbes—a microbiome. It is now recognized that microbiomes are major drivers of health in all animals, including humans, and that these symbiotic systems often exhibit strong daily rhythms.

New research led by Pacific Biosciences Research Center (PBRC) scientists revealed that, in the mutually beneficial relationship between with the Hawaiian bobtail squid, Euprymna scolopes, and the luminescent bacterium, Vibrio fischeri, an immune protein called “macrophage migration inhibitory factor” or “MIF,” is the maestro of daily rhythms. This finding, published in the Proceedings of the National Academy of Sciences, could provide important clues on factors affecting human microbiome rhythms, as the MIF protein is also found in abundance in mammalian symbiotic tissues.

To survive, the nocturnal Hawaiian bobtail squid depends on V. fischeri, which gives it the ability to mimic moonlight on the surface of the ocean and deceive monk seals and other predators, as it forages for food. The symbiotic bacteria also require nutrition, especially at night when they are more numerous and their light is required for the squid’s camouflage.

The research team, led by Eric Koch, who was a graduate researcher at the Pacific Biosciences Research Center (PBRC) in the UH Mānoa School of Ocean and Earth Science and Technology (SOEST) at the time of the study, determined the squid regulates production of MIF as a way to control the movement of specialized immune cells, called hemocytes, which provide chitin for bacteria to feed on.

At night, when the team found MIF was low in the squid’s light organ, hemocytes were allowed into the regions where the bacteria reside and chitin was delivered. During the day, MIF was very high, which inhibits the hemocytes from coming into the symbiotic tissues and dumping their chitin at the wrong time.

This cycling of nutrients has cascading effects on all of the other rhythms associated with the symbiotic system—perhaps affecting overall health, development or reproduction.

“We had recognized daily rhythms in the squid-vibrio symbiosis since 1996, but how the rhythm is controlled was not known,” said McFall-Ngai. “This study brought the whole thing into sharp focus, allowing us to understand how the rhythm works and how it matures in the animal.”

Such discoveries can pave the way for understanding how microbiomes function—what they do and how they do it—in other organisms and environments.

“A recent study of the mammalian, and human, gut microbiome has shown that MIF is present at high levels and controls the interactions of the microbes with the host cell,” said McFall-Ngai. “As has happened with other phenomena, such as developmental inducers, the simplicity of the squid-vibrio system has provided a window into the mechanisms of symbiosis. Because these mechanisms appear to be highly conserved among all animals, including humans, understanding how they function promises to give us the tools to foster healthy people and resilient ecosystems.”