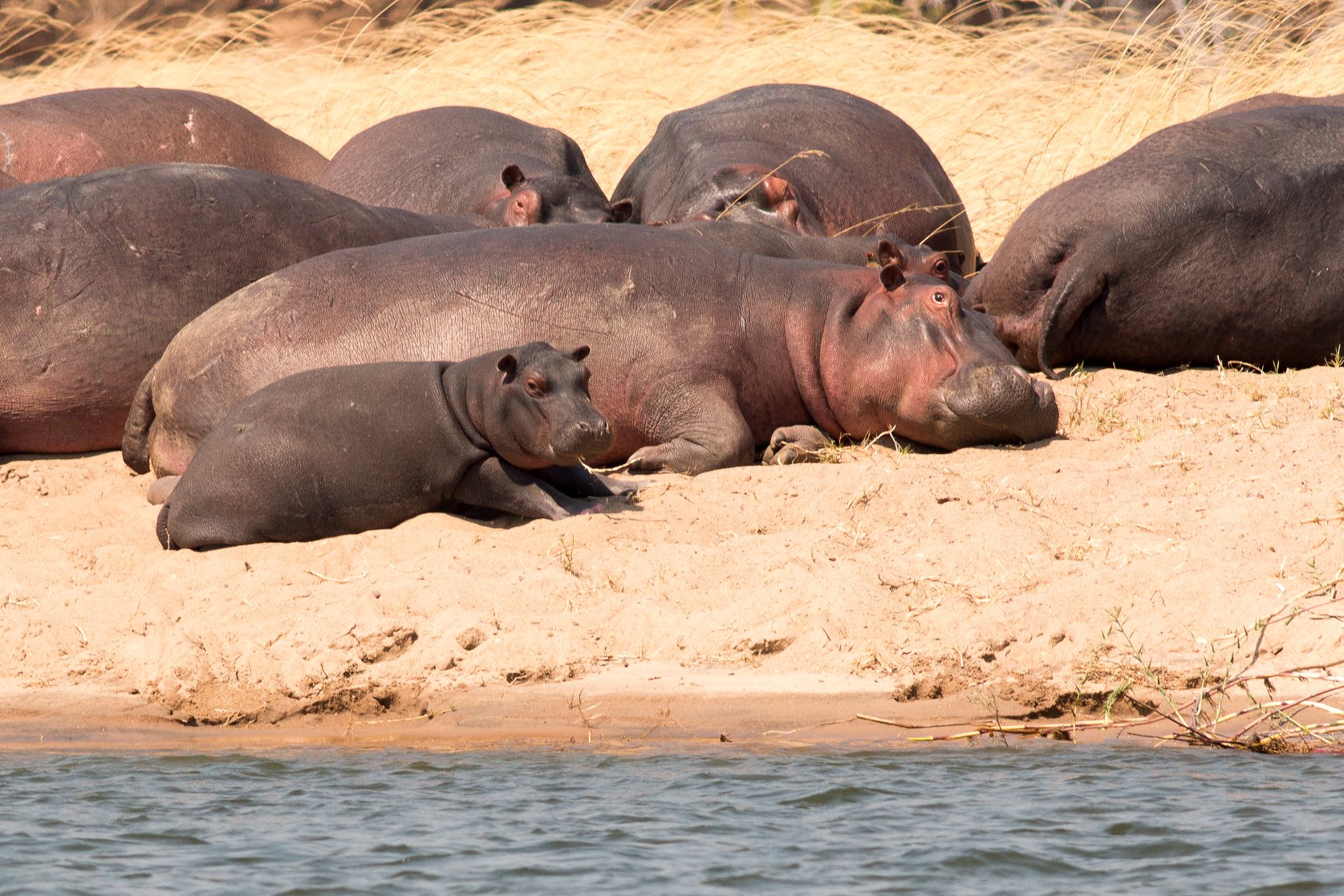 Hippos, one of many threatened species of herbivores, rest on the protected shores of the Zambezi River in Mana Pools National Park in Zimbabwe. (Photo credit: Edd Hammill)

Modern-day megaherbivores (plant-eaters weighing more than 2,200 pounds) such as elephants, hippopotamuses and bison are at greater risk of extinction than other types of animals, with unknown consequences for Earth and all of its inhabitants, according to a new study co-authored by Elizabeth Madin, researcher at the Hawai‘i Institute of Marine Biology (HIMB).

One million years ago, the extinction of large-bodied plant-eaters changed the trajectory of life on Earth. The disappearance of these large herbivores reshaped plant life, altered fire regimes across Earth’s landscapes, and modified nutrient cycles in such a way that Earth’s climate became slightly colder.

Armed with a dataset of the diets of over 24,500 mammals, birds, and reptiles, a team of scientists, led by Utah State University assistant professor Trisha Atwood, set out to answer the question “Are plant-eaters, meat-eaters, or animals who eat both plants and meat at the greatest risk of extinction?”

Their findings, published in the journal Science Advances, challenge a two-decade-long perception that meat-eating animals, or predators, were the most likely group to meet the ire of Earth’s six mass extinction.

The results indicate that with over a quarter of the world’s modern-day herbivores threatened with extinction, plant eaters have the highest representation of at-risk species in the present day.  The study also highlights that this attack on herbivores is not a new phenomenon. Human activities have led to the disproportionate extinction of herbivores compared to predators since at least the late Pleistocene (11,000-50,000 years ago).

“These results definitely surprised us,” said Madin. “We went into this project thinking that the data were likely to simply confirm our general perception that modern-day predators were most at risk of going extinct. To me, this kind of thing is one of the most exciting parts of being a scientist.”

Because a species’ role in its ecosystem is intricately linked to what it eats, understanding whether predators, herbivores (plant eaters), or omnivores (meat and plant eaters) are at the highest risk of extinction helps scientists and society understand what the potential consequences of losing those species are.

Already, the consequences of declines in modern herbivores from land-use change and hunting have begun to echo those that occurred on Earth 1 million years ago–alterations to plant life, changes to fire regimes, and disruptions to nutrient cycling. “Our study highlights the need for continued, strategic conservation investment in protecting the species that are both most at risk and those that play key roles in ecosystem functioning,” said Madin. “While our results point out that overall, herbivores may be most at risk as a group, many other groups are likewise threatened. Protecting whole geographic areas of habitat can be a very effective way to achieve protection of multiple groups simultaneously.”

To better inform conservation actions, the researchers are now wrestling to understand what it is about herbivores, scavengers, and piscivores (animals that consume fish) that make them more susceptible to extinction compared to other animals.

“Documenting a pattern in extinctions is only the first step towards curbing the loss of species,” says Atwood. “We need to understand the intricacies of why this pattern is occurring; only then will we really have a chance at stopping these future extinctions.”