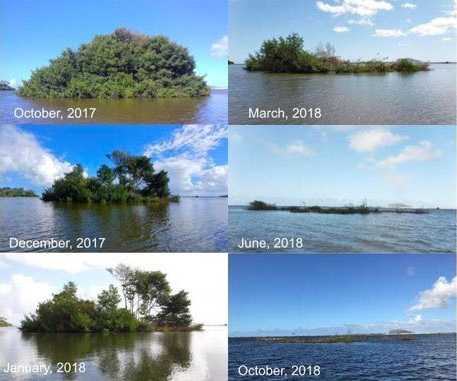 A project at Heʻeia Fishpond to remove an island of invasive red mangroves and replace them with native plant species has been completed, with studies showing that the fishpond’s ecosystem and water quality have improved dramatically.

The two-year project was led by the UH Sea Grant College Program funded by the state Department of Health’s Clean Water Branch. The project focused on the complete removal of the invasive mangrove vegetation from the island that was more than 160 feet in diameter and 70 feet high. The island of invasive red mangroves was initially formed during a massive May 1965 flood that blew out part of the fishpond wall.

In addition to improving the health of the fishpond, the project served as a learning opportunity for two UH Mānoa graduate fellows in the Department of Oceanography. Paula Moehlenkamp and Aka Beebe focused their theses work on researching and monitoring water quality parameters and circulation within the fishpond.