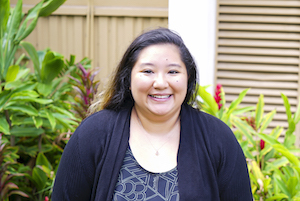 The University Corporation for Atmospheric Research (UCAR) has announced the winners of the 2019 Next Generation Fellowships. Diamond Tachera, graduate student in the University of Hawaiʻi at Mānoa School of Ocean and Earth Sciences (SOEST) has been named Diversity and Inclusion Fellow.

Tachera is a kanaka ʻōiwi (Native Hawaiian) student who is pursuing a doctoral degree in hydrogeology at the SOEST Department of Earth Sciences. Her research focuses on precipitation and groundwater connectivity between Hawaiian aquifers, and her scientific goals focus on the intersection of indigenous knowledge and the scientific process to create sustainable water resource management within the State of Hawaiʻi.

Tachera earned her bachelor’s degree in geology and geophysics, also at UH Mānoa. Since she was an undergraduate student, she has participated in the Maile Mentoring Program, a campaign to support native Hawaiian students pursuing STEM degrees through mentorship. Tachera is also on the newly formed School of Ocean and Earth Science and Technology Diversity, Equity, and Inclusion Council at UH Mānoa.

“As a kanaka Earth scientist, I think the intersection of indigenous knowledge and Western science could play a key role in water resource management,” says Tachera. “I see myself as a science-community mediator in the future in a position that allows me to continue to work in a science field but placing importance on meeting and understanding community issues and goals.

The UCAR Fellowship program, which is in its third year, supports graduate students from underrepresented communities in their professional careers as Earth system scientists. The fellows will receive financial support for two years of graduate school and participate in two summer internships with UCAR and the National Center for Atmospheric Research (NCAR), which is managed by UCAR on behalf of the National Science Foundation.

“The Next Generation Fellowships were created to recognize that individuals with diverse backgrounds and experiences are an asset to the scientific community,” said UCAR President Antonio Busalacchi. “This year’s cohort continues to raise the standard set by past fellows in scientific rigor, problem-solving, and community engagement and inclusion in Earth system science.”

Read more on the UCAR announcement.