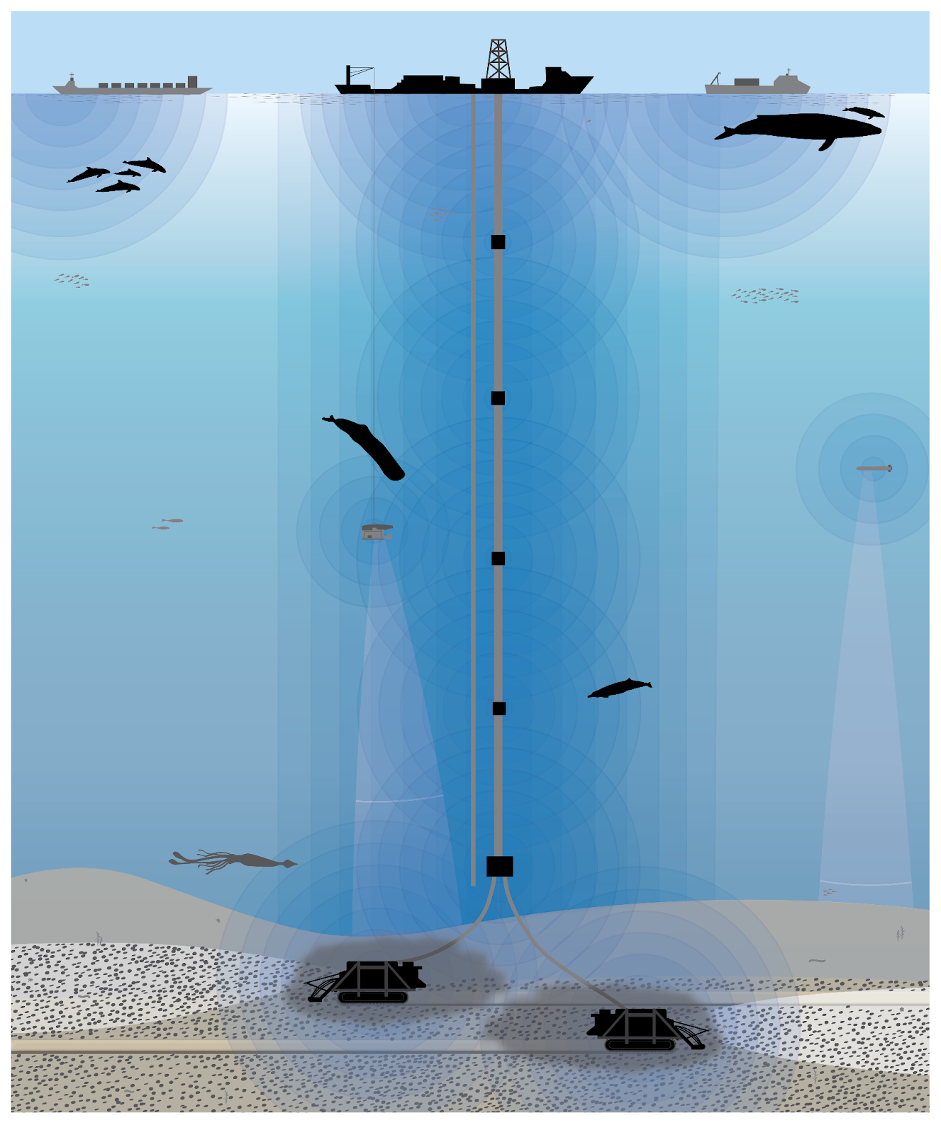 Sources of noise from deep-sea mining activities will span the entire water column, from rigs at the surface, mining tools at the seabed, and pumps along risers to bring nodules to the surface.

A study on underwater noise pollution from seabed mining operations found that noise from one mine alone could travel approximately 500 kilometers (roughly 311 miles) in gentle weather conditions, which could affect the understudied species that live in the deep sea—the largest habitat on Earth. There could also be cumulative impacts where multiple mines operate.

Scientists from the University of Hawai‘i at Mānoa, Oceans Initiative, the National Institute of Advanced Industrial Science and Technology (AIST) in Japan, and Curtin University in Australia, contributed to the study, which was funded by The Pew Charitable Trusts. The findings were published in Science.

The deep sea is home to organisms found nowhere else on Earth—many of whom, given the absence of sunlight, likely use sound to navigate, communicate, find mating partners, locate food, and detect predators and other dangers.

Seventeen contractors are exploring the possibility of mining in the Clarion-Clipperton Zone (CCZ), an area spanning 4.5 million square kilometers (1.7 million square miles) between Hawaiʻi and Mexico and a prime focus of deep-sea mining interest. If each of the contractors were to launch just one mine, an estimated 5.5 million square kilometers (2.1 million square miles)—an area larger than the European Union—would have elevated noise levels. Not only could this level of mining activity have untold impacts on noise-sensitive species, it could also undermine attempts to preserve areas with no mining impact—known as “preservation reference areas”—to use for scientific comparisons.

“Our modeling suggests that mining noise could impact areas far beyond the actual mining sites, including preservation reference zones, which are required under draft mining regulations to be unaffected by mining,” said Craig R. Smith, a professor emeritus of oceanography at the UH Mānoa School of Ocean and Earth Science and Technology (SOEST), Smith says the  finding, “could require rethinking of environmental regulations, including the number of mining operations allowed within the CCZ.”

“What surprised me most was how easy it would be for noise from just one or two mines to impact nearby areas that have been set aside as experimental controls,” said Rob Williams, co-founder of Oceans Initiative. “With so many unknowns, we need a careful comparison of these preservation reference areas to sites where mining is taking place in order to understand mining’s impacts. But noise will cross the boundaries between preservation zones and mining sites.”

Although mining companies are already testing smaller-scale prototypes of deep-sea mining systems, they have yet to share their data on underwater noise pollution. The Science article had to use noise levels from better-studied industrial activities, such as oil and gas industry ships and coastal dredges, as placeholders. True noise levels from deep-sea mining may vary once the data is available—but, says Andrew Friedman, project director of Pew’s seabed mining project, they’re more likely to be higher than the proxy data than lower because actual seabed mining equipment is much larger and more powerful than the proxies. “These are probably conservative estimates.”

Christine Erbe, a professor at Curtin University, said, “Estimating the noise of future equipment and installations is a challenge, but we don’t have to wait until the first mines are operational to discover the noise they make. By identifying the level of noise in the engineering design phase, we can better prepare for how this might impact marine life.”

The island nation of Nauru invoked a United Nations rule two years ago that could force the International Seabed Authority, the intergovernmental organization that regulates all mineral activities in areas beyond national jurisdiction, to complete regulations that would enable large-scale mining by July 2023—or consider mining proposals without internationally agreed regulations in place. The move came despite concerns expressed by governments, corporations, and civil society organizations that the science and governance surrounding mining in the deep ocean remain inadequate.

The Science study joins a growing body of research that finds it unlikely that adequate data to assess the ecological risks from mining noise will be collected before the July 2023 deadline. For this reason, a growing number of countries, experts, corporations and environmental organizations are calling for a halt to any seabed mining, unless and until science and management can be put in place that ensure that mining will not cause harm to the marine environment. Pew’s Friedman said that the study “highlights how much remains unknown about mining’s potential impacts, not just on the deep ocean, but throughout the water column.”

“The deep sea houses potentially millions of species that have yet to be identified, and processes there allow life on Earth to exist,” said Travis Washburn, a deep-sea ecologist at AIST. “While much work is still needed to determine the extent and magnitude of environmental impacts from deep-sea mining, with careful study and management we have a unique opportunity to understand and mitigate human impacts to the environment before they occur.”