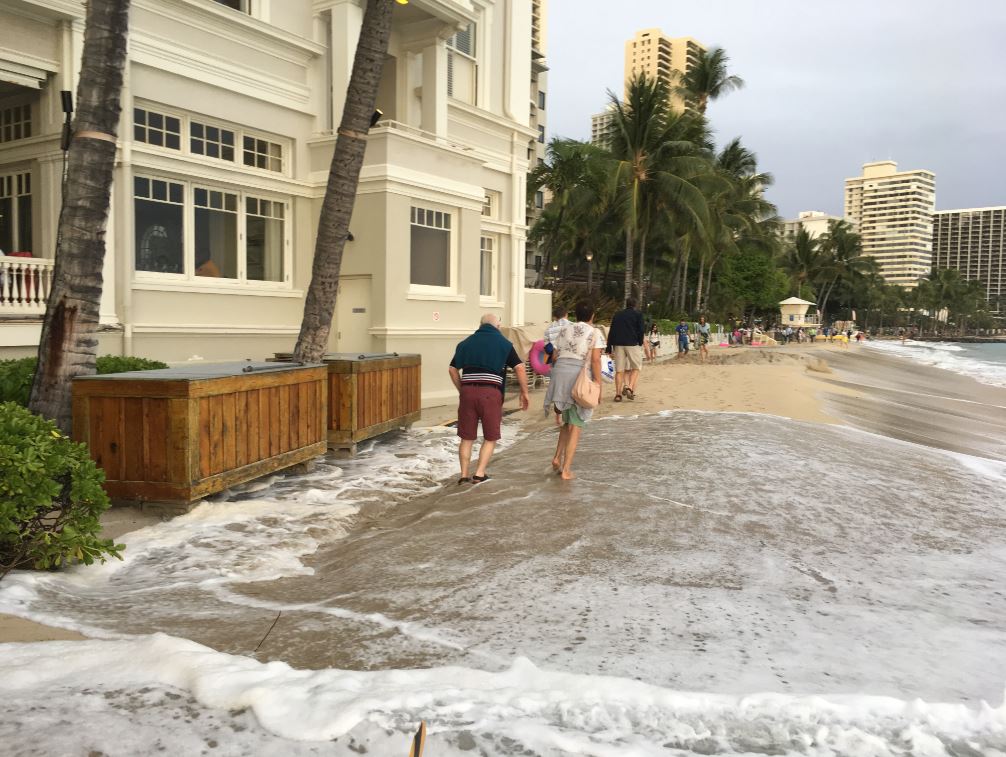 This editorial by SOEST Associate Dean Chip Fletcher was posted in The Hill on November 17, 2021.

Politics is the art of compromise, making it uniquely unsuited for establishing the future safety and well-being of our children. Compromise on safety? Who would ever agree to that? Our leaders, apparently.

In the lead-up to the UN climate summit COP26, U.S. Special Presidential Climate Envoy John Kerry said that the climate change summit in Glasgow would be the “last best hope for the world to get its act together.” Describing the threat of climate change as “existential,” Kerry signaled that the Biden administration understands the science of global warming and is committed to keep temperature increases below 1.5 degrees Celsius and adhere to the Paris Agreement. Hope was in the air.

As a participant at COP26, I watched the upbeat news about agreements on methane reductions, trillions of dollars in renewable energy investments, ending deforestation, an unexpected China-U.S. climate pact and more. Yet, in the end, despite the need for all these steps, the language behind these headlines was vague and even combined, are not capable of stopping warming at the planetary boundary of 1.5 degrees.

Today, air temps are 1.1 to 1.3 degrees above pre-industrial levels and will continue to increase until at least mid-century under all emissions scenarios. Global warming of 1.5 degrees and 2 degrees will be exceeded during the 21st century unless deep and rapid reductions in CO2 and other greenhouse gas emissions occur soon. These reductions mean ending the use of coal, leaving oil and gas reserves in the ground, cutting emissions an average 7 percent every year beginning now, and achieving net-zero emissions by 2050 through a complete transformation of the energy, food, building, industrial and transportation sectors of the global economy.

By the time COP26 came to an end, Kerry’s language, and attitude, had changed. After two exhausting weeks of negotiation, his final remarks reflected the latest analysis: Government energy policies currently in place around the world are projected to result in about 2.7 degrees Celsius of warming above pre-industrial levels. Government pledges to cut emissions would limit warming to 2.4 degrees (that’s if they are met). According to the UN Environmental Program, based on current energy policies, we stand a two-thirds probability of warming 2.8 degrees by the end of the century.

But there is more to the story. We learned this year that our strongest natural ally in reducing emissions, photosynthesis by plants on land, may be faltering. On average, about 30 percent of annual CO2 emissions are removed from the air by this process with the remainder either dissolved in the ocean (causing ocean acidification) or remaining in the atmosphere for decades to millennia (causing global warming). Photosynthesis has a thermal maximum beyond which carbon uptake sharply declines and respiration, the process in which plants give off CO2 and water, sharply increases. Studies show this limit was already briefly passed in the warmest quarter of the past decade and with continued emissions (and warming), land-based carbon uptake is projected to decline by nearly 50 percent as early as 2040. This effect has not been included in published pathways to limiting warming to 1.5 degrees, nor in national pledges to cut emissions.

This is more than a speculative worry. The Amazon basin contains about half of the world’s tropical rainforests, which are more effective at soaking up and storing carbon than other types of forests. After decades of clear-cutting, wildfire, fragmentation and river damming, the Brazilian portion of the Amazon is no longer effective at storing carbon. It has become a net greenhouse gas emitter.

Tropical rainforests are critical to stopping global warming in line with UN targets. As these are lost, we may see other natural systems tip into new states as well. Exceeding the 1.5-degree limit threatens to produce dramatic increases in melting glaciers, thermally expanding oceans, disappearing Arctic Sea ice, coral reef bleaching, changes to key ocean currents, increasing extreme weather and wildfires, spreading forest loss, as well as other devastating impacts. And when we are finally successful at stopping global warming, should we begin the process of removing CO2 from the air, you cannot unmelt the Greenland ice sheet, and you cannot unburn the boreal forest. Setting in motion some of these global-scale biophysical changes may lead to irreversible tipping points in the climate system that could prove highly regretful.

Sounding irritable and defensive, like a man charged with defending an indefensible position, John Kerry encouraged us with “you can’t let the perfect be the enemy of the good.” Settle for “good” in an existential crisis?

If we let it, climate diplomacy will be a death sentence for over 19 percent of Earth’s land area. On our current emission pathway, the Marshall Islands, the Maldives, Kiribati and Tuvalu, Vietnam, SE Asia, the Middle East, North Africa, Central America—and about one-third of land humans occupy—are projected to either drown by sea-level rise or become too hot for human life before the end of this century.

Managing these futures by compromise is suicide. If to a hammer everything looks like a nail, then to a climate negotiator, must every COP climate conference treaty look like compromise?

The final text of the Glasgow Climate Pact commits the 197 parties to the Paris Agreement to “phase down” unabated coal power and “phase out inefficient fossil fuel subsidies.” This language is substantially weaker than expected because of a last-minute change required by India and China, the coal commitment was changed from “phase out” to “phase down.” The pact also commits countries to strengthen their 2030 emissions reductions targets by the end of 2022 and asks rich nations to “at least double” the amount of money they give developing countries for adapting to climate change.

India, China and other developing nations, are deeply engaged in improving human well-being through economic development and poverty eradication. Removing their ability to utilize ready and affordable fossil-fueled energy, threatens this important agenda. This is why climate change mitigation and achieving human equality must go hand in hand and is achieved by investing in the developing world. Deploying renewable energy across developing communities must happen at lightning speed and is, in fact, the best pathway to decarbonizing the global economy and stabilizing the climate for everyone. Investing in the developing world is an investment in ourselves and can be affordably achieved through green COVID-recovery stimulus plans.

If we let it, climate politics, and the art of compromise, will bear responsibility for millions of deaths and untold suffering. The United Nations Framework Convention on Climate Change must develop a better way forward for future COP summits—a way that places science in the lead, and the safety and wellbeing of humankind at the center, there is no time for compromise.