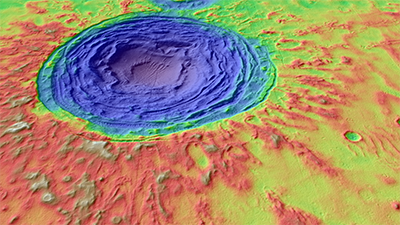 In a recently published study (J. Geophysical Research – Planets (2018) doi: 10.1029/2018JE005543), a team of scientists led by former UH graduate student Christopher Hamilton (now a faculty member at the University of Arizona, Tucson), and including Hawaii Institute of Geophysics and Planetology researcher Pete Mouginis-Mark, used a combination of mathematical models and geologic mapping to reveal that Hrad Vallis, a 800-kilometer-long valley on Mars.  They concluded that this valley was probably formed by an igneous intrusion (underground magma) which triggered a flood of water.

In this new study, Hamilton, Mouginis-Mark and their co-authors found that at least one of the lava flows involved in the formation of Hrad Vallis might be a smooth, inflated pahoehoe flow, similar to those flows seen on the coastal plain of Kilauea volcano.  If this is true, it would be the best example of such a lava flow found on the “Red Planet” to date.  On Mars, these pahoehoe lava flows were most likely erupted over a long period of time (years to decades), which has significance for the subsurface supply of molten rock to the surface from the magma chamber.

The researchers also found that some of the lava flows forming Hrad Vallis may have interacted violently with ice deposits at the surface, creating a landscape of depressions, lakes, and sinkholes. This type of landscape, called thermokarst terrain, occurs on Earth in Arctic and sub-Arctic regions when permafrost melts. Amid this lava-ice interaction, it’s possible that a warm, moist environment could have formed due to the volcanic activity, providing a habitat capable of—at least temporarily—sustaining life.

Read the full story on EOS.