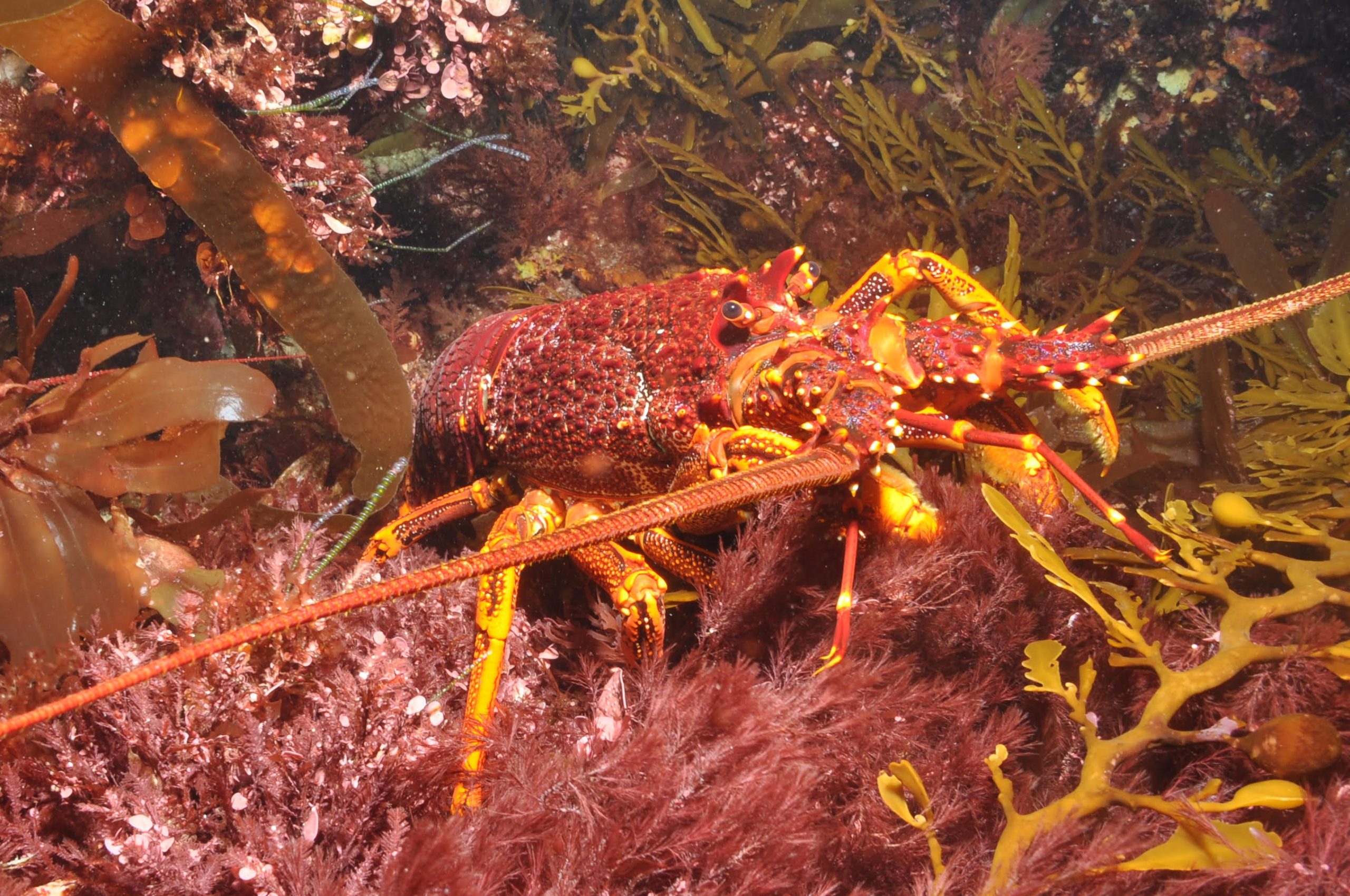 A carnivorous lobster (Jasus edwardsii) within a kelp and other macroalgal-dominated habitat on one of Australia’s many southerly, temperate reefs. Photo credit: Graham Edgar, University of Tasmania.

In a study published recently in Ecology and Evolution, an international team of researchers focused on what can happen to ocean ecosystems when fishing pressure increases or decreases, and how this differs between tropical to temperate marine ecosystems. The team, led by Elizabeth Madin, researcher at SOEST’s Hawai‘i Institute of Marine Biology (HIMB), found ecosystems do not respond universally to fishing.

There has been much debate about the degree to which ocean ecosystems are impacted by fishing, also termed “top-down forcing” because such changes occur when predators at the top of the food web are removed, versus the availability of nutrients and other resources in an ecosystem, termed “bottom-up forcing”.

“Examples from a variety of marine systems of exploitation-induced, top-down forcing have led to a general view that human-induced predator perturbations can disrupt entire marine food webs, yet other studies that have found no such evidence provide a counterpoint,” said Madin.

Madin worked with an amazing team of marine ecologists from all over the world, particularly those from the Australian Institute of Marine Science (AIMS) and the University of Tasmania (UTas). Using time‐series data for 104 reef communities spanning tropical to temperate Australia from 1992 to 2013, they aimed to quantify relationships among populations of predators, prey, and algae at the base of the food web; latitude; and exploitation status over a continental scale.

“This is good news for fishers, because as populations increase, the fish don’t recognize the reserve boundaries and are likely to ‘spill over’ into adjacent areas where fishing is allowed, creating a kind of insurance policy whereby marine reserves ensure the ability of fishers to catch fish into the future,” said Madin.

Surprisingly though, the team found that in the tropics, the system tends to be driven predominantly by bottom-up forcing, whereas colder, temperate ecosystems are more driven by top-down forcing.

“I assumed at the start of the project that in places where fishing pressure was high and predators were depleted, we would see consequent increases in the population sizes of the predators’ prey species, and the decreases in the prey’s prey species,” explained Madin. “However, in the tropical part of our study system, that is, Australia’s Great Barrier Reef, this simply wasn’t the case. This result had me scratching my head for quite some time, until I realized that this type of domino effect, called a trophic cascade, is simply a real, but rare, phenomenon in the tropics.”

These kinds of continent-scale analyses are only possible with large, long-term datasets.

“Only by looking at the very big picture, it turned out, were we able to find these trends,” said Madin.

Predator loss is now a globally pervasive phenomenon that touches nearly every marine ecosystem on the planet. Ecosystem destabilization is a widely-assumed consequence of predator loss. However, the extent to which top-down versus bottom-up forcing predominates in different types of marine systems is not definitively understood.

“Understanding how our fisheries are likely to impact other parts of the food web is important in making the best possible decisions in terms of how we manage our fisheries,” said Madin. “By understanding how coral reef food webs are likely to respond to fishing pressure, or conversely to marine reserves, we can make more informed decisions about how much fishing our reefs can safely handle. Likewise, this knowledge gives us a better idea of what will happen when we create marine reserves designed to serve as an insurance policy so communities can continue to catch fish long into the future.”

Madin was recently granted a prestigious CAREER award, offered by the National Science Foundation in support of early-career faculty who have the potential to serve as academic role models in research and education. With the funding, Madin will focus on understanding what food web interactions can reveal about how coral reefs worldwide are faring as fishing pressure increases or decreases. Interwoven with this research program will be an education and outreach program to help students develop cutting-edge technological skills relevant to marine research and help students and the public understand the importance of coral reefs to Hawai‘i through visual arts, specifically, the creation of reef-inspired public murals.