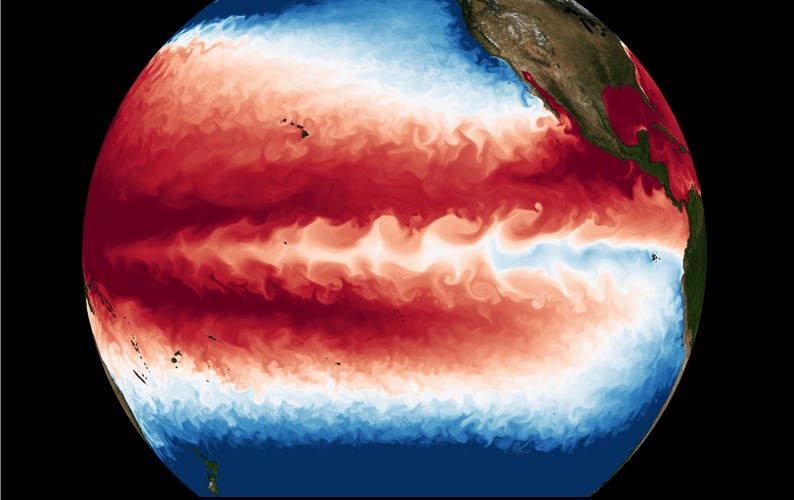 Climate change is happening and accelerating. Earth will continue to warm. And these changes are unequivocally caused by human activities. Those are among the conclusions of the report published recently by the International Panel on Climate Change (IPCC), with University of Hawai‘i at Mānoa assistant professor of oceanography Malte Stuecker as a contributing author.

“The latest IPCC report shows clearly that if we do not drastically curb our emissions, we will head towards temperatures that Earth has not seen in millions of years,” Stuecker summarizes. “Moreover, we can now say with certainty that all of the global warming that occurred since the mid-19th century is due to human activity. While these are sobering facts, we should certainly not despair. In fact, if societies choose a pathway of large reductions in greenhouse gas emissions now, the report also shows that we will avoid the worst possible future outcomes and Earth will experience only moderate additional warming over this century that we can likely adapt to.”

In addition to global warming, regional climate in many parts of the world is impacted by the cycling between warm El Niño and cold La Niña conditions in the eastern Pacific Ocean—commonly referred to as the El Niño-Southern Oscillation (ENSO). ENSO—has persisted without major interruptions for thousands to millions of years. This may also change in a future warmer world, though the recent IPCC report highlights uncertainties in potential changes in ENSO.

Continuing the long tradition of contributing to developing theories and advancing climate models around ENSO, researchers from the UH Mānoa School of Ocean and Earth Science and Technology (SOEST) recently published two additional studies addressing the complexity of this most important climate phenomenon.

There is an emerging consensus among simulations of future climate under strong greenhouse-gas emissions with the most recent generation of climate models that the variability of future ENSO sea surface temperature may increase as the climate warms.

“There is however still much uncertainty on the degree to which ENSO may change and the time at which these potential changes will emerge from ENSO’s natural variability,”said Karamperidou. “This is partly due to incomplete understanding of the phenomenon, partly due to known limitations of models in representing and resolving relevant processes, and partly due to the inherent limitations on our understanding imposed by the short length of the instrumental record.”

Additionally, led by researchers at the IBS Center for Climate Physics (ICCP) in Korea, Stuecker co-authored another study published in Nature Climate Change that produced a series of global climate model simulations with unprecedented spatial resolution. Boosted by the power of one of South Korean’s fastest supercomputers (Aleph), the new ultra-high-resolution simulations realistically represented processes that are usually missing from other models, though they play fundamental roles in the generation and termination of El Niño and La Niña events.

“From this highest resolution future climate model simulation that has been done to date, we conclude that it’s possible that ENSO variability could collapse under strong greenhouse warming in the future,” said Stuecker.

This apparent contradiction in findings raises many interesting questions and highlights the need for further investigation.

“Regardless of the details of how El Niño changes in the future, rainfall and drought will become more extreme in the future due to the fact that we will be living a warmer world with a hydrological cycle on steroids,” said Stuecker.

“Despite the spread of model projections on how ENSO may change under strong anthropogenic forcing, both the IPCC report and the Nature Reviews article demonstrate that its impacts on rainfall are very likely to be enhanced which has significant implications across the globe and the Pacific, including Hawaiʻi,” said Karamperidou.