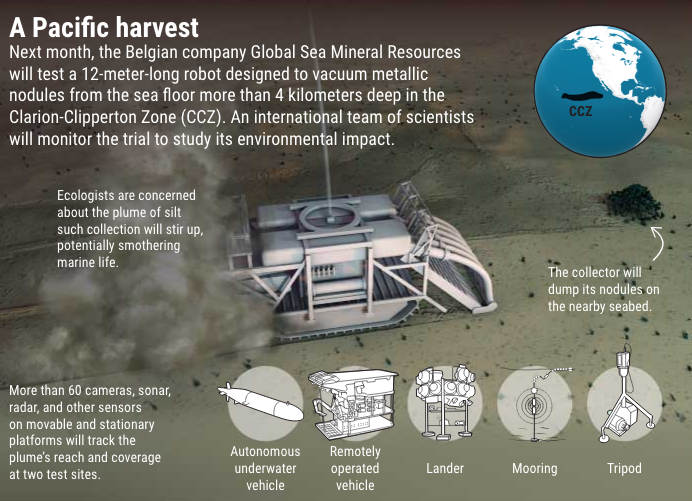 Below is an excerpt from a Science article published March 14, 2019

Sometimes the sailors’ myths aren’t far off: The deep ocean really is filled with treasure and creatures most strange. For decades, one treasure—potato-size nodules rich in valuable metals that sit on the dark abyssal floor—has lured big-thinking entrepreneurs, while defying their engineers. But that could change next month with the first deep-sea test of a bus-size machine designed to vacuum up these nodules.

The trial, run by Global Sea Mineral Resources (GSR), a subsidiary of the Belgian dredging giant DEME Group, will take place in the international waters of the Clarion-Clipperton Zone (CCZ), a nodule-rich area the width of the continental United States between Mexico and Hawaii. The Patania II collector, tethered to a ship more than 4 kilometers overhead, will attempt to suck up these nodules through four vacuums as it mows back and forth along a 400-meter-long strip.

Ecologists worried about the effect of the treasure hunt on the fragile deep-sea organisms living among and beyond the nodules should get some answers, too. An independent group of scientists on the German R/V Sonne will accompany GSR’s vessel to monitor the effect of the Patania II’s traverses. The European-funded effort, called MiningImpact2, will inform regulations under development for seafloor mining, says James Hein, a marine geologist at the U.S. Geological Survey in Santa Cruz, California. “That work is critical.”

Ideal for nodule formation, the CCZ is estimated to contain some 27 billion metric tons of the ore. But its abyssal plain is also a garden of exotic life forms. Craig Smith, a benthic ecologist at the University of Hawaii in Honolulu, has helped lead biological surveys in the CCZ that, in one case, revealed 330 species living in just 30 square kilometers, more than two-thirds of them new to science. The CCZ’s inhabitants include a giant squid worm, predatory sponges resembling ornamented Christmas trees, green-yellow sea cucumbers that researchers called “gummy squirrels,” and a greater variety of bristle worms than ever reported before. “I didn’t expect any part of the CCZ to have among the highest diversities of any deep-sea habitat,” Smith says. “That caught me by surprise.”

To gauge the risk to ecosystems, scientists aboard the Sonne are already patrolling the CCZ, collecting baseline data. Next month, the Sonne will rendezvous with GSR’s ship, and over several weeks the two ships, working some 400 meters apart, will conduct the tests in two areas where GSR has exploration contracts from the United Nations. Before each test, the Sonne will spend nearly 3 days sending more than 60 sensors, including radar, sonar, and cameras, down a lift to the sea floor, using a remotely operated vehicle (ROV) to place them.

These sensors will focus on the plume of sediment the collector kicks up. The waters of the CCZ are some of the clearest in the world, and scientists have long feared that mining could spread a vast blanket of silt, hurting life far outside the mining area. Recent experiments, however, suggest most of the silt particles will clump together and fall out within a kilometer or two, [Andrea] Koschinsky, [a geochemist at Jacobs University in Bremen, Germany] says. But a film of finer nanoparticles might spread farther.

As the collector trundles along, the ROV and an autonomous deep-sea robot will follow, capturing close and distant views. At the end of the 400-meter swath, the collector will drop the nodules it harvested in a pile. (This “preprototype” has no system for delivering them to the surface.) The sensors will continue to monitor the plume for 4 days after the work is done.

Although environmentalists might be tempted to condemn any deep-sea mining, even such a small test, GSR should be commended for its willingness to cooperate with the scientists, says Cindy Van Dover, a deep-sea biologist at Duke University in Durham, North Carolina. “I say bravo. We can’t get answers until we start doing stuff.” Yet given the test’s limited scope and the unknowns of deep-sea life, she doubts it will solve what is, to her, the most pressing question: “How will we know we screwed it up?”

Read the full article on Science.