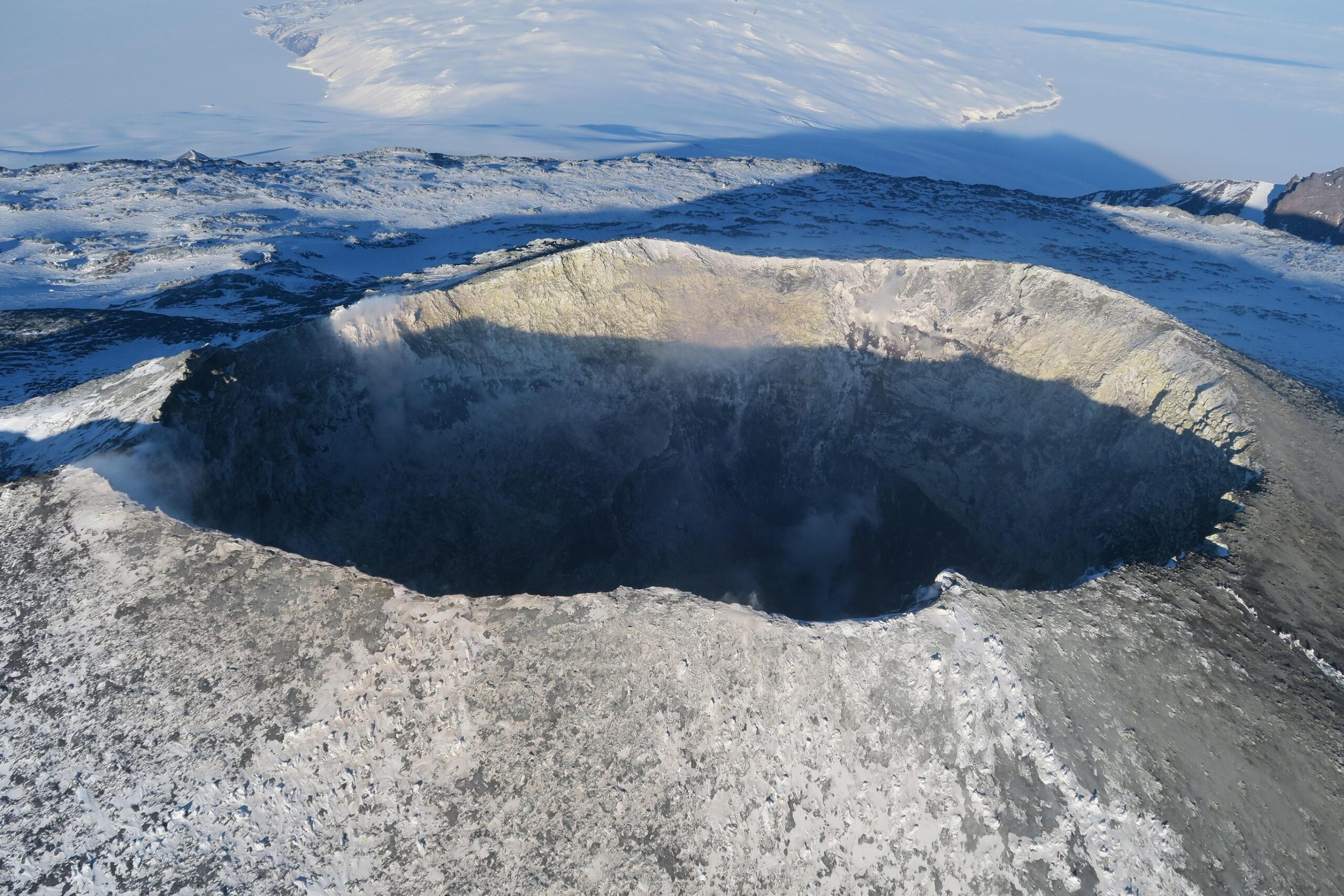 Carbon dioxide deep underground helps magma avoid being trapped deep in Earth and allows it to reach the surface, according to a new study published in Nature Communications and co-authored by a University of Hawai‘i (UH) at Mānoa geophysicist.

A key piece of the puzzle for understanding global continental evolution, Antarctica contains examples that define the spectrum of Earth’s volcanic processes. A team of researchers, including UH Mānoa School of Ocean and Earth Science and Technology (SOEST) postdoctoral researcher Erin Wallin, used geophysical methods similar to CT scanning of the human body to peer into the structures and processes 60 miles beneath Mount Erebus, Antarctica’s only active volcano.

Mount Erebus exemplifies a family of volcanoes with an alkalic chemical composition, with lavas relatively rich in sodium, potassium and other elements including rare earths elements, while being relatively poor in silica.

“Mount Erebus is an example of a CO2-dominated rift volcano, a complement to the more widely known arc volcanoes of the Pacific Rim and elsewhere, dominated by H2O,” said Graham Hill of the University of Canterbury New Zealand and lead author of the study.

Alkalic volcanoes are very different from volcanoes found in places where Earth’s tectonic plates are pushing toward each other, such as in the Cascade Range extending from northern California through British Columbia to Alaska. As the oceanic crust is forced below the crust of the continent, that ocean crust sinks into the Earth and partially melts. The water in the rocks becomes part of the melt and is the dominant “volatile,” or molecule that easily bubbles out of a solution like fizz out of a carbonated drink.

The evolving magma rises into and through the crust, but typically does not make it to the surface because, as the pressure from the overlying crust diminishes with ascent, the water flashes out, sometimes explosively as in the case of Mount St. Helens in 1980. The remaining magma stalls and freezes in place, typically at a depth of around three miles.

But Erebus volcano on Ross Island, Antarctica, is in a continental rift zone—where Earth’s crust and mantle are pulled apart. Magmas in rift zones also have volatiles from the recycling of ocean crust and sediments, but these are much older and are liberated to the surface through the rift process. Instead of water, the volatiles in these magmas are CO2-dominated.

The team’s geophysical data show a steep conduit originating in the upper mantle—the magma source. But the conduit takes a pronounced sideways turn in the deep crust before reaching shallower magmatic storage and the summit lava lake. The turn acts as a valve for the episodic flow of magma and CO2. This magmatic valve is likely formed by intersecting north-south and east-west faults, since faults in the same east-west orientation are known to exist in the area around Erebus, and provides the magma’s path to the surface.

Unlike the H2O-rich arc volcanoes of the Cascades and the Pacific Rim, the CO2-dominated Erebus shows the structures that allow magma to rise right to the volcano’s lava lake, since the magma doesn’t stall in the crust like water-dominated magmas.

“Understanding transport controls and pathways for this type of volcano, dominated by CO2, reveals to us the scales and volumes of volatile transport in the Earth,” said Phil Wannamaker, the study’s second author and a geophysicist at the University of Utah. “Such volcanoes elsewhere are important hosts for essential mineral deposits such as rare earths, increasingly important for societies future resource needs.”

Portions of this content courtesy of University of Utah