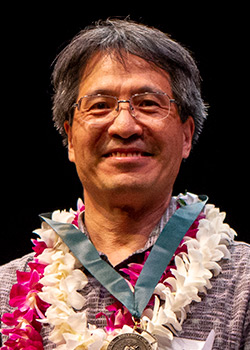 Bo Qiu, professor of Oceanography in SOEST, was honored with the Henry Stommel Research Medal by the American Meteorological Society (AMS). Qiu is recognized for his seminal contributions using observations, models, and theory to understand the dynamics of the North Pacific Ocean circulation and its role in the climate system.

With this and other science and technology awards, AMS recognizes those whose work and dedication have had a profound impact on the weather, water, and climate science community. The Henry Stommel Research Medal is granted to researchers in recognition of outstanding contributions to the advancement of the understanding of the dynamics and physics of the ocean. It represents the highest award the Society can bestow upon an oceanographer.

Qiu joined the Oceanography Department in 1993 as an Assistant Professor and was promoted to Associate Professor in 1998 and Professor in 2003. His scientific interests include large-scale ocean circulation variability, mid-latitude air-sea interaction, geophysical fluid dynamics, and satellite oceanography.  His prior professional recognitions include: the Okada Prize from the Oceanographic Society of Japan (1993), the New Investigators Award from NASA (1996), the University of Hawaii Board of Regents’ Medal for Excellence in Research (2018), and the Japan Oceanographic Society Prize (2019).

“I am truly honored and humbled to receive this prestigious medal from AMS,” said Qiu.” With my research interest in the North Pacific Ocean and climate, I was very fortunate to join the Department of Oceanography of SOEST in 1993 as a young faculty. Surrounded by the ever-changing Ocean of my interest and by the intellectually-stimulating colleagues and students in the Department and SOEST, I was able in the past 27 years to conduct unique research while contributing to the educational mission of the University.  While a personal honor, this research award is really a reflection of the collegiality and the nurturing environment of the Department and SOEST that have allowed me to mature, contribute, and receive recognitions from colleagues.”