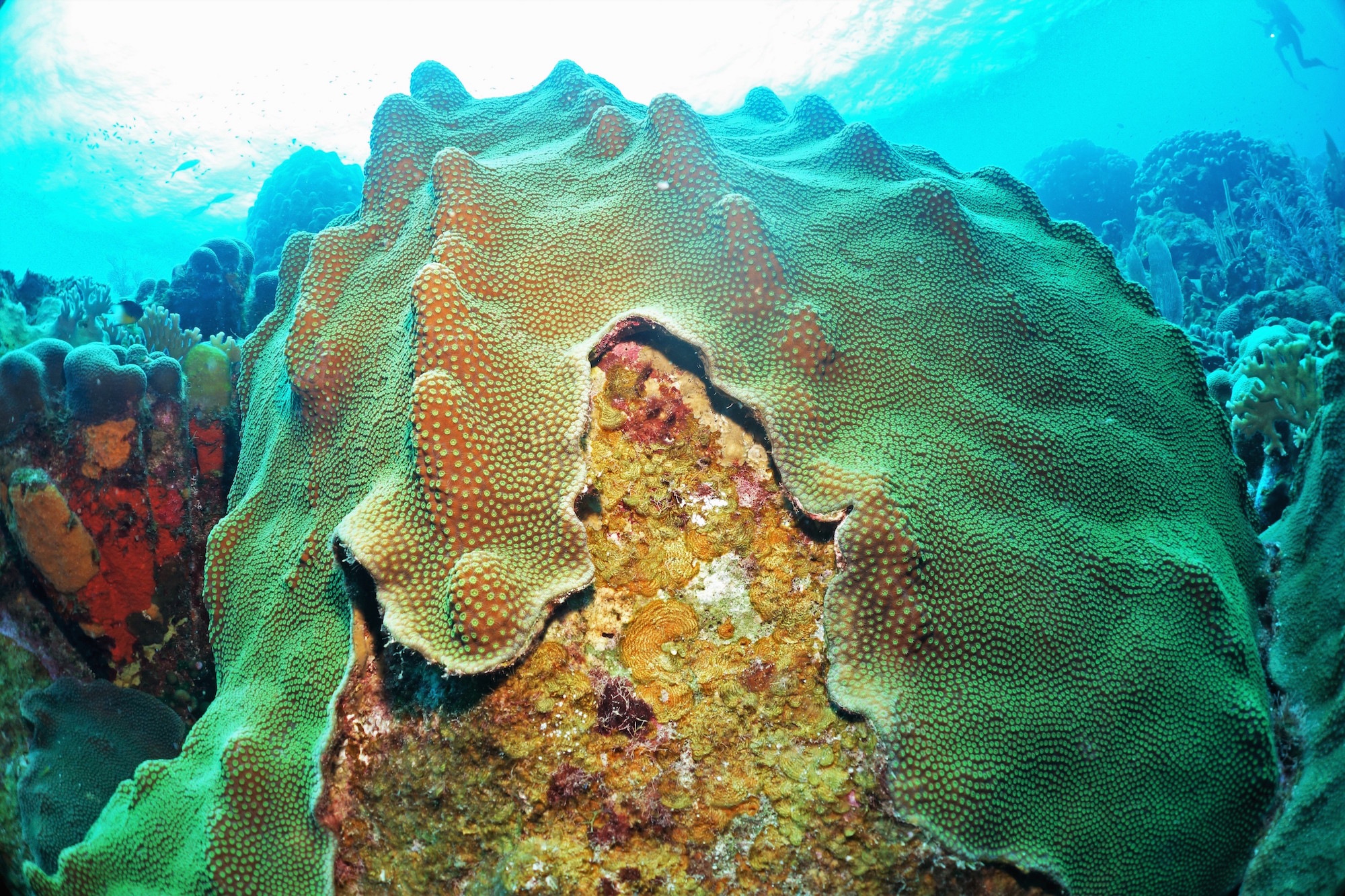 Competition between coral and algae on a reef is mediated by the interaction between all of their associated viruses, bacteria and biochemicals. Credit: Ty Roach.

Though corals worldwide are threatened due to climate change and local stressors, the front lines of the battle are microscopic in scale. Under stress, many reefs that were formerly dominated by coral are shifting to systems dominated by turf and fleshy algae. A new study, published in PNAS on June 1 and led by researchers at the University of Hawai‘i (UH) at Mānoa and San Diego State University (SDSU), found that the outcome of the competition between coral and turf algae is determined by the assemblage of microbes at the interface where the contenders meet.

All plants and animals are associated with communities of viruses and microbes—their microbiome—that interact via a suite of chemicals produced by their metabolism, termed metabolites. The new study, largely conducted at SDSU, investigated the role of each component, host organisms, viruses, bacteria, and metabolites, in coral–turf algal interactions. The researchers gathered data on genes, proteins and metabolic products associated with corals and algae on a reef and directly looked at the bacteria and viruses under a microscope.

“We found that when coral interacts with turf algae on a reef, there is a unique chemical and bacterial community that forms at the interface between these two organisms, an emergent microbiome,” said Ty Roach, postdoctoral researcher at the Hawai‘i Institute of Marine Biology in the UH Mānoa School of Ocean and Earth Science and Technology and co-lead author of the study. “This interface community is made up of larger bacterial cells that use energy at a faster rate. Our data suggest that this change in bacterial size and energy use, which can negatively affect coral, is driven by a change in which types of bacteria dominate the microbiome.”

“Our chemical analysis indicates this change is driven by bacteria that feed on algal-derived biochemicals, a phenomenon we call the Algal Feeding Hypothesis,” said co-lead author Mark Little, doctoral candidate at SDSU. “Interestingly, these changes in bacterial groups and their energy use, which comes from feeding on specific chemicals, are similar to changes seen in the human gut, with dominant bacteria linked to obesity.”

Coral reefs are valued for their cultural and ecological importance, providing protection against storms and waves, and serve as reservoirs of biodiversity. Restoring coral cover and building reef resilience provides the foundation essential to a functional and healthy reef ecosystem, which is critical for the surrounding community.

“This highlights the fact that many ecological interactions between organisms are actually mediated by viruses and bacteria,” said Forest Rohwer, biology professor at SDSU and senior author of the study. “This provides opportunities to engineer probiotics to alleviate the effects of stressors on corals.”

The research team plans to use the insight gained from this study to design and test probiotic blends for use on corals. In this way, they aim to utilize personalized medicine techniques to help corals gain an ecological advantage over competitors such as harmful algae.

Read more in The Garden Island and The Maui News.