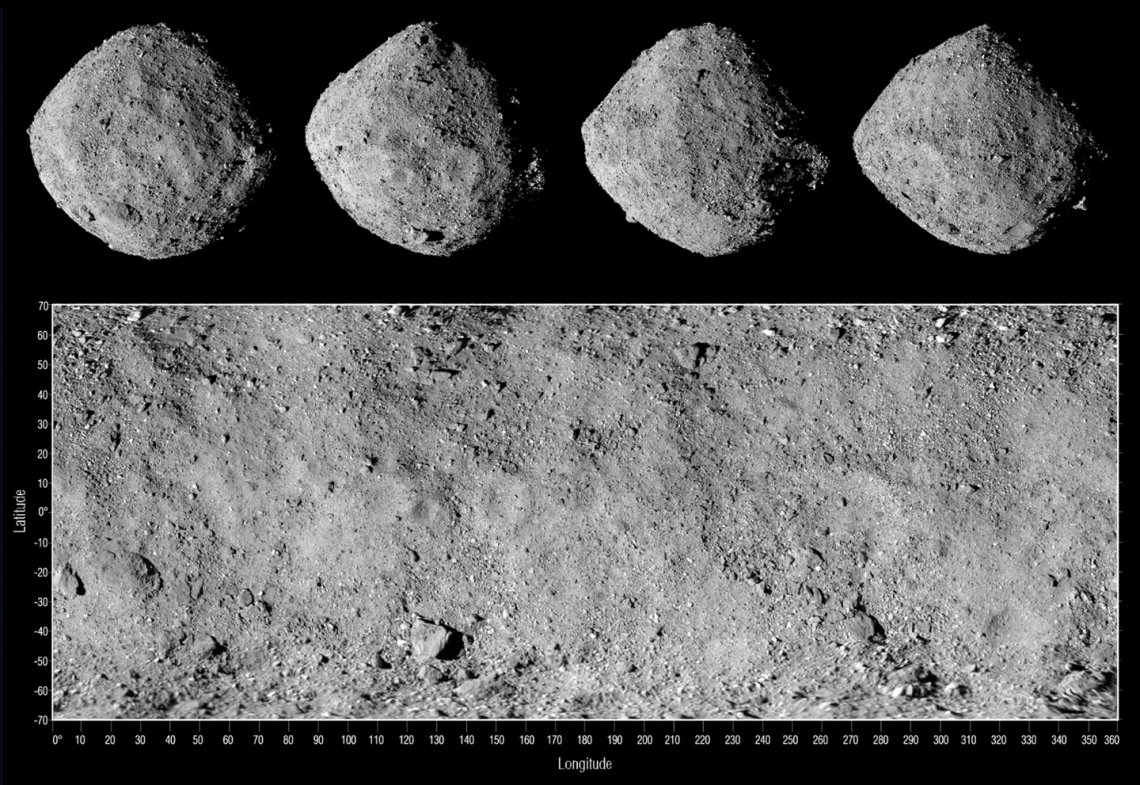 This image shows four views of asteroid Bennu along with a corresponding global mosaic. The images were taken on Dec. 2, 2018, by the OSIRIS-REx spacecraft’s PolyCam camera, which is part of the OCAMS instrument suite designed by UArizona scientists and engineers.NASA/Goddard/University of Arizona

Studying impact craters on the rugged surface of asteroid Bennu, the target of NASA’s OSIRIS-REx mission, allowed a team of researchers to reconstruct the history of this near-Earth object in unprecedented detail. The scientists, including David Trang of the University of Hawai‘i at Mānoa School of Ocean and Earth Sciences (SOEST), revealed that despite forming hundreds of millions of years ago, Bennu wandered into Earth’s neighborhood only very recently.

The report, published in the journal Nature, provides a new benchmark for understanding the origin and evolution of asteroids in general, offers insights into a poorly understood population of space debris hazardous to spacecraft and sheds new light on our understanding of the solar system. The findings could also inform future strategies aimed at deflecting or disrupting asteroids deemed potential impact hazards to Earth.

Although Earth is pelted with more than 100 tons of space debris each day, it is virtually impossible

to find a rock face pitted by impacts from small objects at high velocities. Courtesy of Earth’s atmosphere, any debris smaller than a few meters appears as a shooting star rather than striking the surface as essentially a bullet from outer space.

The research team used high-resolution images and laser-based measurements taken during the two-year surveying phase in which the OSIRIS-REx spacecraft orbited Bennu and made record-breaking close approaches—studying even tiny craters, with diameters ranging from a centimeter to a meter.

“Seeing these craters for the first time as soon as we received the high-resolution images of Bennu’s surface was exciting,” said Trang, who is a researcher at the Hawai‘i Institute of Geophysics and Planetology (HIGP) in SOEST. “I’ve never seen boulders naturally damaged like this on any other planetary bodies before. It really opens up a new area of research for those of us interested in impact cratering.”

“The rocks tell their history through the craters they accumulated over time. We haven’t observed anything like this since astronauts walked on the moon,” said the paper’s lead author, Ronald Ballouz, a postdoctoral researcher in the University of Arizona Lunar and Planetary Laboratory.

With a mathematical formula, the researchers were able to make inferences about the types, velocities and sizes of impactors the boulders were exposed to, and for how long.

“If a boulder gets hit by something larger than an object that would leave a certain size crater, it would just disappear,” Ballouz explained. In other words, the size distribution of boulders that have persisted on Bennu serve as silent witnesses to its geologic past.

Based on their calculations, the authors determine that Bennu is a newcomer to Earth’s neighborhood; while it is believed to have formed in the main asteroid belt more than 100 million years ago, it is estimated that it was kicked out of the asteroid belt and migrated to its current territory only 1.75 million years ago. Extending the results to other near-Earth objects, or NEOs, the researchers also suggest that these objects likely come from parent bodies that fall in the category of asteroids, which are mostly rocky with little or no ice, rather than comets, which have more ice than rock.

With these data, researchers can validate their models of where NEOs come from, according to Ballouz, and get an idea of how strong and solid these objects are – crucial information for any potential missions targeting asteroids in the future for research, resource extraction or protecting Earth from impact.

The publication comes just a few days after a major milestone for NASA’s University of Arizona-led OSIRIS-REx mission. On October 20, the spacecraft successfully descended to asteroid Bennu to grab a sample form its boulder-scattered surface – a first for NASA. Scientists expect to know more about the quality of the sample in the coming days. The plan is for the sample to be returned to Earth for study in 2023, where it could give scientists insight into the earliest stages of the formation of our solar system.