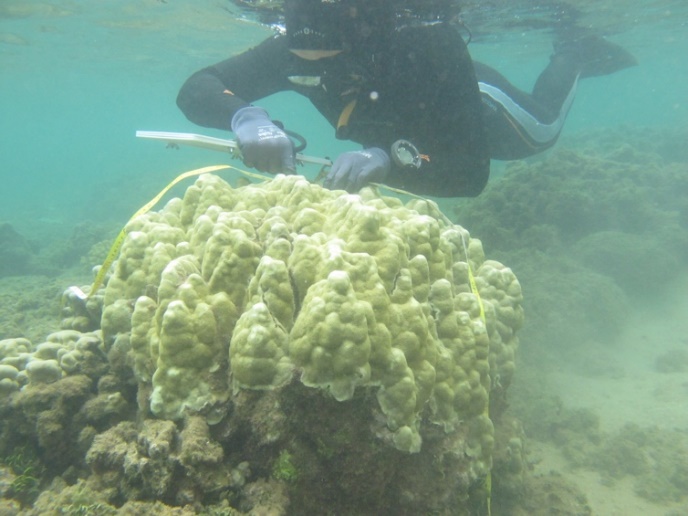 A team of researchers from the Hawai‘i Institute of Marine Biology (HIMB) and the Bernice Pauahi Bishop Museum recently replicated a landmark study from 1970 to determine changes in coral thermal tolerance since that time. Surprisingly, in the recent heat stress tests, three dominant species of Hawaiian corals were more resilient than their 1970 counterparts—bleaching later, with higher survivorship and growth rates.

The scientists replicated the identical experimental system, methodology, coral species, collection site, and even brought in one of the original researchers, Dr. Steve Coles. The Hawaiian corals from Kāneʻohe Bay, Oahu showed differences in coral bleaching temperature either because of changes in physiological processes (acclimatization) or because of natural selection for the survival of more temperature tolerant corals (adaptation).

Climate change is increasing at an alarming rate including the warming and chemical changes in the ocean. The ocean drives weather and climate, stabilizes the temperature, generates most of the oxygen in the atmosphere and absorbs much of the carbon dioxide.

The International Panel on Climate Change, a group of renown scientists from over 40 countries recently announced their predictions based on tens of thousands of scientific papers. They predict that if humans do not make drastic changes in reducing carbon emissions within the next 12 years 99% of the world’s coral reefs will be gone in one more generation.

“We are currently at a pivotal place in history where the decisions we make or fail to make will determine the fate of our reefs,” said Rodgers. “We need to fully understand the mechanisms and responses to develop solutions, define accurate predictions, and advance management efforts to protect and conserve coral reefs.”

One of the confounding factors the researchers were not able to replicate was the higher nutrient levels in Kāneʻohe Bay in 1970 when untreated sewage was being discharged directly into the area. Although these levels were lower than the levels that have historically been shown to increase the rates of bleaching and mortality in corals, the team wants to be certain this did not affect the new results. In an upcoming experiment, the scientists will be replicating the nutrient levels from 1970 to determine any positive or negative effects on the corals today.

Expanding to other regions of the world to determine where and if acclimatization and/ or adaptation is occurring and under what conditions, will follow as the next important step. In addition, the coral reefs in Kāneʻohe Bay have a long history of anthropogenic insult thus, further research is needed to understand the role of genetics in coral acclimatization and adaptation.