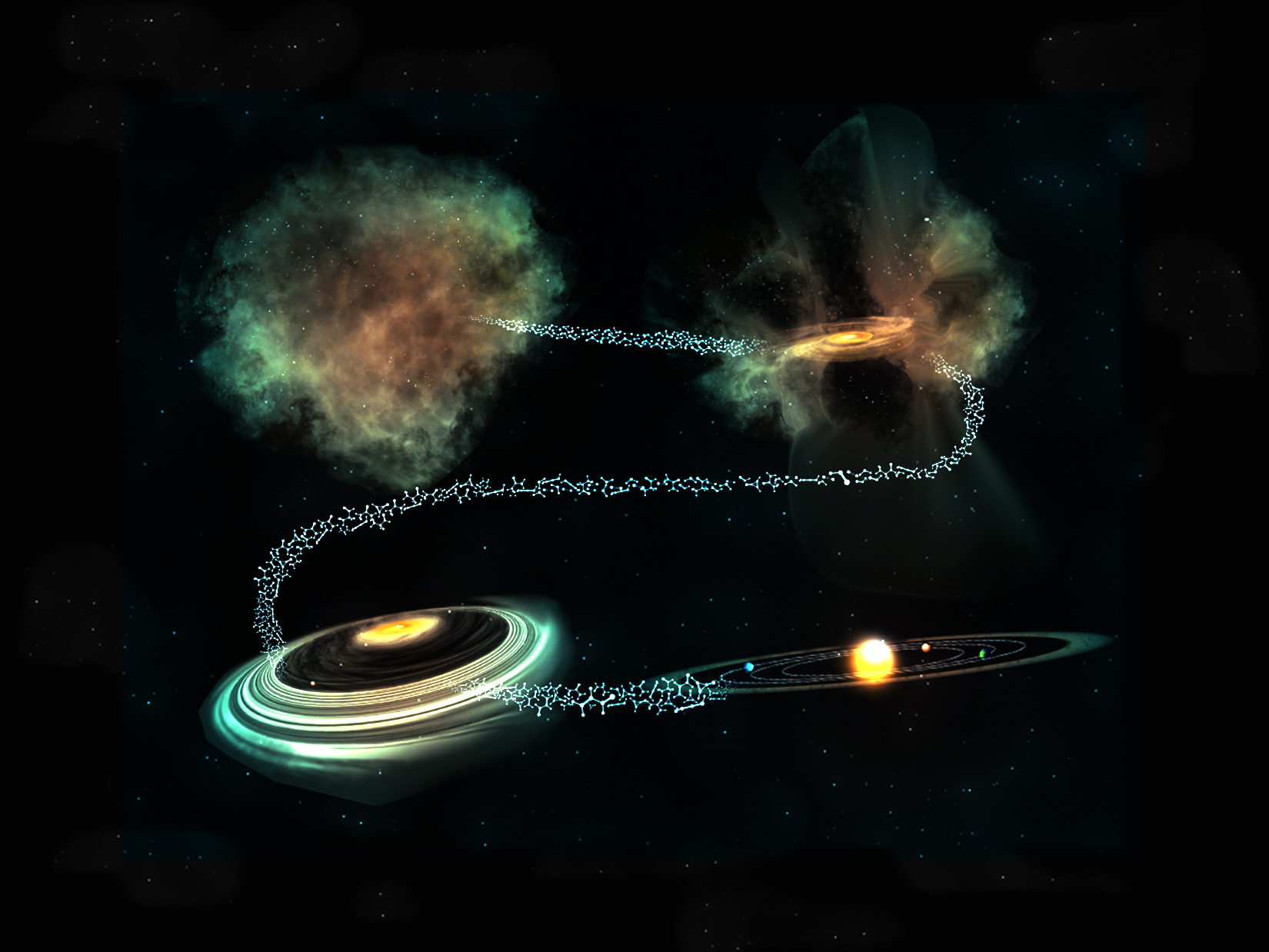 Illustration showing the journey of volatiles from interstellar gas and dust thence into star-forming clouds, protoplanetary disks, and finally planets and their atmospheres. Credit: Dina Clark/UCSC

To trace the volatile elements that form the atmospheres of planets, NASA’s Astrobiology Program awarded a five-year, $5-million grant to an interdisciplinary consortium, including researchers at the University of Hawaiʻi. The award will help establish a scientific foundation for detecting the signatures of life on other worlds.

The research targets elements and molecules such as nitrogen, water, carbon dioxide, ammonia, hydrogen and methane that are often found in planetary atmospheres. These are commonly called “volatiles,” and many are essential to the development of life.

The team is led by Natalie Batalha at the University of California Santa Cruz (UCSC), and is one of eight new research teams selected by NASA to inaugurate its Interdisciplinary Consortia for Astrobiology Research (ICAR) program. The UH collaborators are Eric Gaidos in the Department of Earth Sciences, Bin Chen, Elena Dobrica and Gary Huss in the Hawaiʻi Institute of Geophysics and Planetology, and Dan Huber and Jonathan Williams at the Institute for Astronomy. In addition to UH and UCSC, the consortium includes researchers at the University of Colorado at Boulder, University of Kansas and NASA Ames Research Center.

“My UH colleagues and I look forward to contributing to this multi-disciplinary investigation that will answer two big questions. First, how did the Earth get its volatile elements, and, second, can we find habitable planets with similar volatiles around other stars?” explained UH Mānoa astrobiologist Gaidos.

The research will include observations of the formation of planetary systems and habitable planets around other stars, as well as laboratory research on volatiles in the solar system.

Gaidos added, “Here in Hawaiʻi we are fortunate to have at our disposal both telescopes to observe distant planet-hosting stars, and microscopes to study meteorites and samples returned from space. These, and laboratory experiments to simulate the processes affecting volatiles, are crucial pieces of this puzzle.”

A recent analysis of data from NASA’s highly successful Kepler Mission, which discovered more than 2,500 exoplanets, suggests there are at least 300 million potentially habitable worlds in our galaxy. But Batalha noted that a planet in the “habitable zone” of its star (where liquid water could pool on the planet’s surface) does not necessarily have all the conditions needed for life.

“There may be planets with liquid water on the surface that are dead,” said Batalha, who served as Kepler project scientist. “One of the messages from the Kepler Mission was that the diversity of exoplanets far exceeds the diversity of our own solar system. If we want to understand the diversity of rocky planets in habitable zones, we have to study the physical processes that sculpt them.”

For this team, that means “following the volatiles,” tracing the path of the volatile elements such as carbon and oxygen that make up a planet’s atmosphere. That path goes from star-forming clouds into protoplanetary disks, to the building blocks of planets, and eventually into the planets themselves, where volatile elements can move between the surface, atmosphere and interior, and even be lost to space.

The researchers will address four fundamental questions: What is the inventory of volatiles in planetary building blocks? Where do volatiles come from, and where do they go? How are volatiles distributed between a planet’s interior, surface and atmosphere? And what can atmospheric observations tell us about the volatile inventories and chemistries of exoplanets?