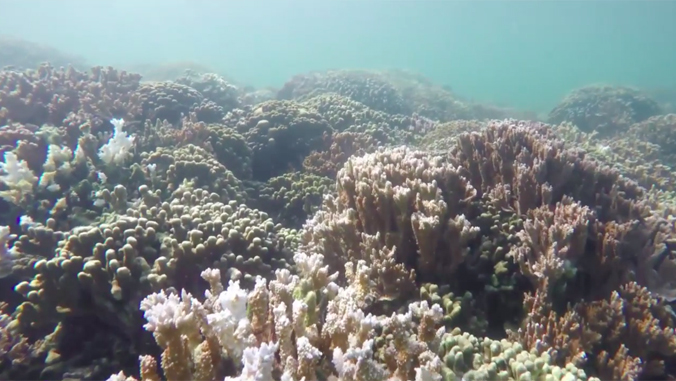 Under a worst-case scenario, half of coral reef ecosystems worldwide will permanently face unsuitable conditions in just over a dozen years, if climate change continues unabated. That is one of the findings from new research published on October 11, in PLOS Biology by University of Hawaiʻi at Mānoa researchers. Unsuitable conditions will likely lead to the corals dying off and other marine life will struggle to survive due to disruptions in the food chain.

“While the negative impacts of climate change on coral reefs are well known, this research shows that they are actually worse than anticipated due to a broad combination of climate change-induced stressors,” said lead author Renee O. Setter, a doctoral student in the Department of Geography and Environment in the College of Social Sciences. “It was surprising to find that so many global coral reefs would be overwhelmed by unsuitable environmental conditions so soon due to multiple stressors.”

Using an ensemble of global climate change models, the researchers compared scenarios of five environmental stressors projected from the 1950s through the year 2100. These stressors included sea surface temperature, ocean acidification, tropical storms, land use and human population. From prior studies, threshold values for the stressors that led to unsuitable environmental conditions for coral reefs were identified.

“We know that corals are vulnerable to increasing sea surface temperatures and marine heat waves due to climate change. But it is important to include the complete anthropogenic (environmental change caused or influenced by human activity) impact from numerous stressors that coral reefs are exposed to in order to get a better sense of the overall risks to these ecosystems,” added co-author Erik Franklin, associate research professor at the Hawaiʻi Institute of Marine Biology in SOEST. “This has great implications for our local Hawaiian reefs that are key to local biodiversity, island culture, fisheries and tourism.”

According to researchers, this study is the first that looks at multiple stressors in modeling and projection scenarios to show that the cumulative area that is impacted by any stressor is leading to a greater coverage of unsuitable conditions globally. This is creating a shorter timeline for remaining reefs as they can be vulnerable to one of many projected stressors that are quickly approaching.

Research team members are preparing to enter the next phase of their work, which will take a closer look at how climate change is projected to affect individual coral species. By identifying which species are more likely to survive unsuitable conditions and which may be more vulnerable, the team hopes to better understand which species may be more at risk to future stressors.

In addition to Setter and Franklin, co-authors include Department of Geography and Environment Professor Camilo Mora.