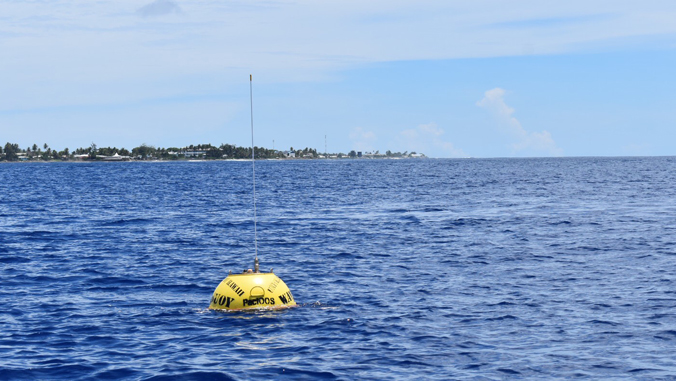 PacIOOS wave buoy off the low-lying atoll Majuro, Republic of the Marshall Islands. This buoy measured 16 feet in significant wave height during a storm in November 2019. (Photo credit: PacIOOS)

PacIOOS, based at the University of Hawaiʻi at Mānoa School of Ocean and Earth Science and Technology, currently owns and operates more than 35 observing platforms throughout the Pacific Islands region, including the State of Hawaiʻi, the U.S. territories and U.S. Freely Associated States. PacIOOS also maintains modeling data that inform coastal, ocean and atmospheric forecasts.

PacIOOS information is used by the National Weather Service for ocean forecasts, harbor pilots for safe marine navigation, coastal managers for inundation forecasts and recreational users for surfing, fishing, boating and other activities. Accurate and reliable data of waves, currents, water quality, wave run-up and more can be accessed for free on the PacIOOS website via a variety of visualization tools that allow for easy access.

“PacIOOS observations from buoys, sensors, stations and animal tags provide information about the most recent coastal and ocean conditions, and the data help to improve short- and long-term forecasts. We are establishing time series that can record changes in the ocean environment and detect trends over time. Pacific Island communities are vulnerable to sea level rise and extreme weather events—our data empower decision-makers and coastal communities to make safe and informed decisions,” said Melissa Iwamoto, director of PacIOOS. “As PacIOOS embarks upon our 13th year in operation, we are grateful for the continued funding support and trust in our system.”

This year, PacIOOS also received funding from the U.S. State Department and is partnering with federal and local agencies to expand its network of real-time wave buoys in the insular Pacific. Large areas in the Freely Associated States currently lack real-time data, posing a safety concern both on land and in the ocean. Three new wave buoy sites are planned, and additional buoys will be available to maximize operational uptime. Capacity building and training are also in development to expand technical expertise among local partners and authorities.

Additional funding from NOAA will help replace PacIOOS’ aging instrumentation and infrastructure in Hawaiʻi and increase observations in the insular Pacific. Plans are underway to provide real-time sea surface currents information between the islands of Guam and Rota (part of the Commonwealth of the Northern Mariana Islands), an area known for its challenging ocean conditions. Real-time and modeled data of currents are extremely important for search and rescue operations and to inform the safety of ocean users.

PacIOOS is one of 11 regional associations of the U.S. Integrated Ocean Observing System (IOOS®). More than $39 million was awarded in 2020 across the U.S. IOOS. Regional associations coordinate local coastal and ocean observing and decision-support projects to address community needs that integrate into the national system.

PacIOOS is currently developing a new 5-year proposal (2021–2026) and a 10-year outlook. To provide suggestions and input, contact info@pacioos.org.