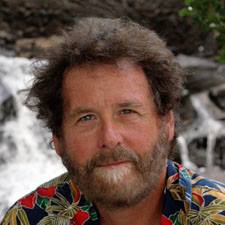 Rhett Butler (SB MIT 1974, PhD Caltech 1979) is former Director of the Hawaii Institute for Geophysics and Planetology, and has been associated with the University of Hawai‘i since 1982. He served as the Program Manager for the US$150,000,000 Global Seismographic Network (GSN) from its inception in 1986 through 2010 at the Incorporated Research Institutions for Seismology (IRIS). With 153 broadband seismic stations globally distributed with free and open, real-time data access, the GSN is a primary data source for Earth research and education, earthquake monitoring and tsunami warning, and nuclear treaty monitoring. Dr. Butler also initiated U.S. efforts for re-using undersea telecommunication cables for ocean observatories (including the Hawaii-2 Observatory, H2O), and negotiated the donation of cables from AT&T for the scientific community. He has led establishing advanced seismic facilities in polar environments both at the South Pole and with the Greenland Ice Sheet Monitoring Network. In 2011-14, he has served as consultant to the NASA InSight mission to Mars, and to the United Nations International Telecommunication Union (ITU) on scientific monitoring with submarine telecommunication cables. He serves as Chair of the Science and Society Committee for the U.N. Joint Task Force (ITU/WMO/UNESCO-IOC) for integrating scientific sensors into submarine telecommunication cables. He has authored or co-authored more than 50 refereed scientific publications, and over 100 other scientific abstracts and reports. Dr. Butler is currently directing research re-assessing tsunami threats to Hawaii from great earthquakes in the Aleutian Islands, working in close cooperation with the Pacific Tsunami Warning Center and Hawaii State Civil Defense.